GM Pontus Carlsson has embarked on a project of social responsibility by helping to organise “Näringslivet tillsammans med Förorten”. This initiative is an effort to create more inclusion of people of ethnic minorities in Sweden through chess. Chess benefits millions because of its widespread appeal to all regardless of social background. 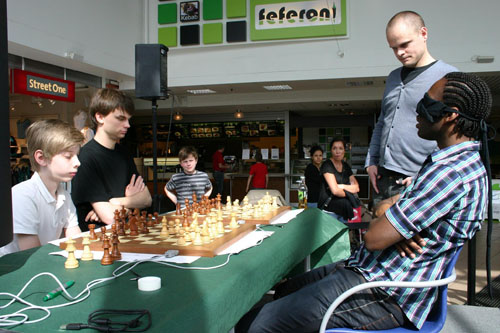 On May the 29th there were celebrities on hand to partake in this important event. Astronaut/space traveler Christer Fuglesang played in an exhibition tournament together with school children from the Swedish suburbs. “It is an international game, I have met people all over the world through chess. From a mountain hut in Norway to Istanbul, even from space, I played,” says Fuglesang, who is also a member of the Swedish Chess Academy.

The tournament paired a business executive with a child from the suburbs in a team where they alternate moves (without discussion). Sixteen teams competed and the format of the tournament is a round robin with four teams and four groups. The group winners qualify for two semifinal matches and finally there it is knockout until one winner is crowned.

“Chess has taught me to see other people’s interests and thoughts and to have a strategic perspective on many decisions in life.”

The tournament is organized by the efforts of Carlsson and Swedish Chess Academy (www.schackakademien.se) and was open to the public with live transmission of the games, a moderator and live commentary in the famous (Sergel Gallerian) Sergel Mall in central Stockholm. 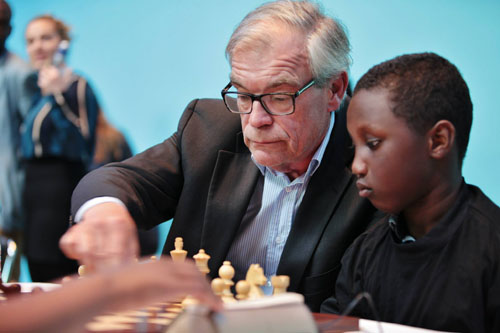 According to the press release…

“In the The Chess Academy we want to show that chess is a great way to (in pleasant circumstances) meet people of different age, culture and background. Chess has taught me to see other people’s interests and thoughts and to have a strategic perspective on many decisions in life,” says Jan Stahlberg, Chairman of the Swedish Chess Academy.

The Swedish Chess Academy aims to show how chess can be a meeting point on equal terms, regardless of background and circumstances. With the game as a motivator chess has the potential to create new relationships and friendships between people who otherwise rarely would meet, or have few points of contact.