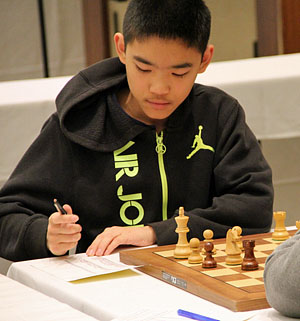 The 2015 Chicago Open attracted nearly 900 entrants from around the continental U.S. and players from dozens of countries. There was Cuban maestro Lazaro Bruzon Batista along with Gata Kamsky leading the field of over 100 players in the Open section (including 24 GMs). There were eight sections in all and nearly half of the participants appeared to be scholastic players.

The surprise winner of this year’s event was 14-year old Jeffery Xiong (pronounced shi-ong) who scored his third GM-norm and has passed the 2500 FIDE rating. Once his title is conferred he would only be second to Samuel Sevian as the youngest GM in U.S. history. There were ten norms earned in the tournament.

What appears to be the beginning of a new renaissance in U.S. chess with both Hikaru Nakamura and Fabiano Caruana qualifying for the World Championship, Xiong’s victory as well as the success of Sevian, Kayden Troff, Ray Robson, Daniel Naroditsky, Conrad Holt, Alex Lenderman and Sam Shankland means that there is a healthy stream of talent emerging.

Xiong resides in Texas and will try to earn a spot in the U.S. Championship by winning the U.S. Junior Closed in July. This victory is by far his biggest win to date and will give him loads of confidence in his next tournament. Xiong defeated Boris Avrukh of Israel (undefeated in five tournaments) and Cuba’s Bruzon in the last two rounds to score the shocking result. Here is his win over Bruzon in a theoretical Berlin…

All chess players have a story of their chess beginnings. How did this improbable journey began for Jeffery Xiong? After noticing his friend’s playing at a birthday party, 4-year old Jeffery became fascinated at the piece movements. He played in his first tournament at age seven. However, he is on a fast-track to success and is one of the brightest stars in U.S. Residing in the Dallas county, he is home-schooled by his mother Jennifer Li and father Wayne Xiong and takes online courses so that he can immerse himself in chess.

To those who have not watched Xiong, he has been improving for quite sometime often challenging himself to the strongest opportunities in the U.S. circuit. He has been coached by GM Babakuli Annakov and currently retains GM Yaro Zherebukh. He may remind one of a young Fabiano Caruana with his diminutive size and a cool, confident demeanor. The future is indeed bright for the scholastic chess All-American and young GM-elect. Look forward to seeing him in future U.S. Championships!