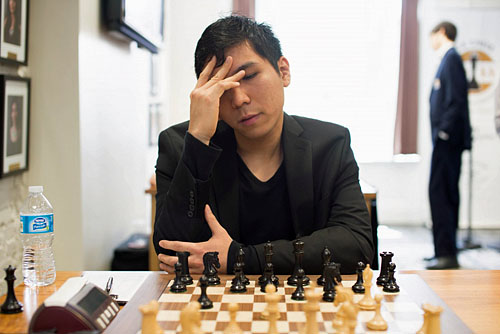 Wesley So composed himself against Gata Kamsky,
but there is much on his mind.
Photo by Lennart Ootes.

While it shouldn’t be a surprise that the top six players are members of the Olympiad team, the order is somewhat of a surprise. A day after Wesley So lost his fourth game on a forfeit, he beat Gata Kamsky in fine style. This was a good sign that So had rebounded from his forfeiture.

Against Kamsky he had to beat back initial aggression. It was apparent that Kamsky was testing So’s state of mind, but black got a very solid position. It is uncertain why Kamsky opted for 28.g4? but it immediately lost a pawn to 28…Ng6. After that So tightened the vice and white’s position collapsed. Good win for So who will gain good ELO points back. According to chess2700.com, So has lost 16 points thus far.

Very difficult interview with Wesley So after round ten.
Video by CCSCSL.

Nakamura-Robson was a showdown between the top two in the standings. This game did not have much in the Four Knights Game and was draw at move 30. Nakamura maintains a half-point lead and will get Alexander Onischuk tomorrow in a tough pairing. Robson gets Timur Gareev who has only gotten one win thus far. Of course, Nakamura would have to lose in order for there to be any chance of a playoff. 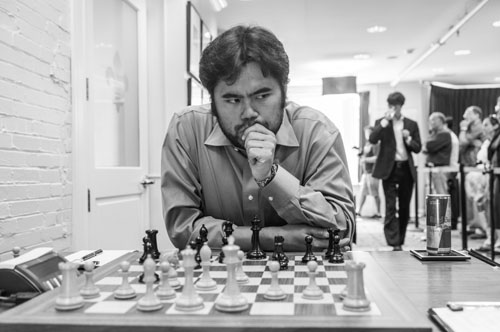 Hikaru Nakamura is hearing the footsteps of Ray Robson.
Photo by Lennart Ootes.

Alexander Onischuk beat Samuel Sevian who has cooled off a bit after a strong start. The game was a Grunfeld Defense where black went wrong in the middlegame by overextending his central pawns and losing one of them. In fact, black’s pawns were in shambles and were picked off one after the other. Conrad Holt has had an up and down tournament including the devastating loss to Troff, but upended Sam Shankland after developing a space advantage and pressing with a kingside attack. After 24.f5! black decided to sacrifice the queen to ward off the attack. However, black’s king had no protection and vulnerable against the slicing power of the queen and bishop. On cue, one of the rooks was skewered and the Shankland resigned.

Irina Krush is finally in sole possession of first place after mating Jennifer Yu. Nazi Paikidze beat Katrina Nemcova moving into a tie for second place but also getting the tiebreaker in case of a tie. All Krush needs is a draw to clinch another title. It will be her 7th. Tatev Abrahamyan has notched a couple of wins in the second half to offset a horrible start. Today she beat Rusudan Golteiani who has struggle in the past couple of several rounds

Their game was a classical Scheveningen Sicilian that has been seen countless times. White piled up her forced on the g-file after prying open the kingside with a pawnstorm. Black used a white pawn on h6 as a shield, but white sacrificed a knight to get the pawns rolling. Look at the incredible position… three pawns on the sixth versus a rook! Black had to sacrifice one of her rooks, but white played the ending well and converted the point.

Foisor-Ni had the rare Czech Benoni inviting a positional encounter, but the Romanian would have none of it. Her 8.h4 seem to reveal her aggressive intentions. Black countered energetically white white never followed up h4 with any coherent plan. In fact, it was black who began to snatch the initiative. Ni play some fine positional moves to penetrate white’s camp… on 31.Qg7 32.Qxg7+ Kxg7 black was on top. Thereafter it appeared that white’s position collapsed in a matter of ten moves. Ni’s extra pawns would prove to be the deciding factor. Nit has certainly played above her expectations and is now sitting on +2.

Melekhina-Sharevich was a weird game in which the evaluation swung wildly in critical moments. White essayed the Closed Sicilian and unfurled a slow kingside attack. While the initial attack was parried, white maintained an advantage in space plus the passed d-pawn was a monster and was hard to blockade. 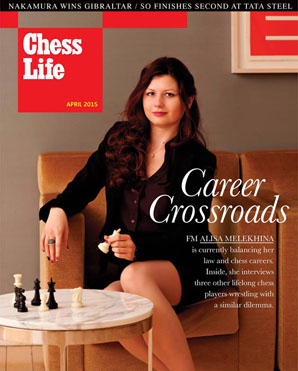 In a turn of events black corraled the f-pawn and finally got the king in to block and win the d-pawn. It appeared that Melekhina was trying to arrive at one of the drawing positions in the R+P ending. In fact, after an exchange of blunders, she got her chance but made a crucial mistake in allowing the black rook access to the h-file with 64.Kh5?? (64.Kh4!=) when after 64…Rf3! the game is over.

Heartbreaking loss for Melekhina who has had a rough go in this tournament. She told The Chess Drum that she hoped to make a better showing to prove the point made in her excellent piece in Chess Life on balancing chess and career. The article is a must-read and The Chess Drum will run a story on his timely topic. Perhaps she placed pressure on herself trying to prove her hypothesis when her participation in the event (and various chess, academic and law successes) was proof enough. It is a topic that has not fully been explored.

Virkud-Wang petered out rather quickly in a concrete game without many imbalances. The three scholastic players have not scored well, but the amount of experience they will received will be invaluable for confidence and for future development as chess players.