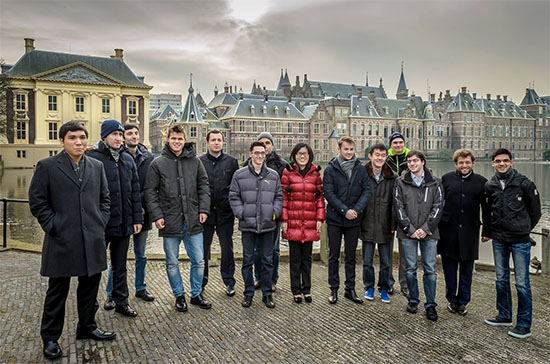 The tournament moved to the Hague today and the players took an excursion. This photo was taken in front of the famous Binnenhof, the governmental district of The Netherlands. This will one day be a “how many players can you name” photo.

The streak is over for the world champion, but he has been able to keep the distance as other contenders drew. In the post-game press conference, Magnus Carlsen seemed exasperated that he didn’t get a chance to play a real game as Vasil Ivanchuk steered the game into a sterile draw.

Carlsen chuckled noting that the Ukranian was 1½ point behind and expected a fight. Quickly, the game was leveled and Carlsen took more interest in discussing the other games. A insightful discussion followed on a wide range of topics. Definitely worth a look!

Carlsen’s prediction that perhaps it is India as the future dominant power (as opposed to China) has been uttered before by Nigel Short. Both overlook China’s vigorous support and remarkable structure as opposed to India’s temperamental federation and uneven support by the private sector. Lots of talent in India, but perhaps not the structure needed to gain consistency. The Chinese women have proven what such a system can produce and they have dominated women’s chess for 25 years.

In this game, Saric played 9.f4 instead of Radjabov’s 9.0-0-0, but the game transposed. This time it was Giri who improved with 14…e5 instead of his 14…Rc8 in the aforementioned game. In this line, white never got any attack going and it was black who was probing. The time had come. Black executed a theoretical exchange sacrifice 30…Rxc3! shattering white’s center.

In another exciting Sicilian, Loek Van Wely crushed women’s world champion Hou Yifan in 24 moves. The Dutchman eschewed the chance to go into a sharp Sicilian and essayed the positional Rossolimo Attack. Before the game there was an inside joke between Carlsen and Van Wely. Carlsen gave this account…

It’s funny. Right before the game Loek was talking about the way he wanted to catch the first bus home. I told him he should play 1.e4 then! I didn’t think he would take me seriously, though… then he kind of ruined the impression by playing [1…c5 2.Nf3 Nc6] 3.Bb5.

Perhaps the most exciting game of the round was a wild affair between Baadur Jobava and Fabiano Caruana. As usual, the Georgian displayed his creative flair and gave the fans their money’s worth. Playing 1.d4 Nf6 2.Nc3 Nf6 3.Bf4!? white sidestepped Caruana’s Grunfeld to simply play chess. However after 20 moves he started to lose the thread of the position. Caruana built up a strong position while whites pieces were a bit clumsy.

The fireworks started with 33…Nh4 34.Bh3 Nf3+ 35.Kg2 Qd6 36.Rxd5 Bxd5 37.Rxd5 Qb6 38.Rxc5 Qxc5 39.Nxe4 (diagram). The smoke clears and white has sacrificed two exchanges for a couple pawns and a weakened black king. Of course black should be winning but play is still tricky and time was winding down.

White still had some play and actually won all the material back. When it appeared that he would escape with a draw, he blundered horribly with 51.Kg3?? after which he got mated. How many times have we fought back in a losing position only to throw away the draw on one move? Too many times. Truly an entertaining game nevertheless. Take a look!

Standings after Round #10 (Masters)

Wei Yi won again to take a share of 1st place after beating back Erwin L’Ami’s piece sack. Black never got enough compensation despite white’s pieces being underdeveloped… especially after the queens were traded. Robin Van Kampen mated Bart Michiels with a neanderthal kingside attack. Despite the win, he remains 1½ back and chances to win have all but vanished. Meanwhile Jan Timman has tumbled near the bottom of the standings with another loss… this time it was Salem Saleh getting a much-needed win. The Emirati is now on 50% All other games were drawn.

Standings after Round #10 (Challengers)