PRESIDENT’S CHRISTMAS MESSAGE TO
MEMBERS OF THE JAMAICA CHESS FEDERATION 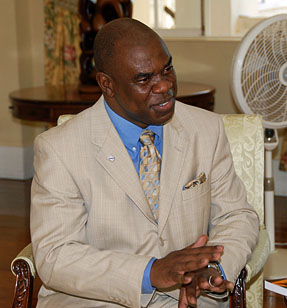 This is to wish for you and yours a tremendous Christmas season and a truly fantastic 2015 when it comes.

I also extend similar sentiments to our Caribbean brothers and sisters, regional federations and the wider chess community led by the World Chess Federation (“FIDE”).

2014 has been a challenging one for us but, nonetheless, it was our best year ever from several perspectives especially having regard to sponsorship raised.

We also made history in a number of ways including the following:

(d) sending our biggest every delegation to a World Chess Olympiad (Tromso, Norway, 2014);

(f) having the inaugural Hall of Fame awards ceremony on the 26th September, 2014 with founding President Mr. Enos Grant and former president Mr. John Powell being the first inductees; and

(g) Chess being selected as part of the RJR Foundation’s National Sportsman/woman of the Year Awards for the first time in our 45-year history. This ceremony will be held on the 16th January, 2015.

Chess continues to soar with thousands of new players making it the fastest growing sport in the country. This was possible through your support and, of course, that of families, friends and sponsors.

I would like to take this opportunity to thank everyone for contributing to a very successful year. We owe to you a tremendous debt of gratitude.

I encourage you to re-double your efforts to make 2015 even more superb, surpassing the above-mentioned accomplishments. Remember – ask not what Chess can do for you but what YOU can do for Chess!

Going forward let us cement Chess, once the game of kings, as the KING of games!