Amy Lee and Maurice Ashley present
a triumphant Wesley So with the winner’s check.
Photo by Paul Truong.

GM Wesley So told The Chess Drum that he was skeptical about the tournament a month ago, but decided to play at the urging of Webster coach Susan Polgar. He asserted that as a full-time student, he had little time to prepare for the tournament, but was able to use the services of his coach with great effect. He was pleased with the outcome.

I give the tournament five stars!
~ GM Wesley So

When asked about the method to his success, he mentioned his physical training as one of the main components. He also gave credit to his coach and his team which consists of 10 Grandmasters. It has been a whirlwind year for So who is completing the federation transfer to the U.S., but still remains a proud Pinoy. 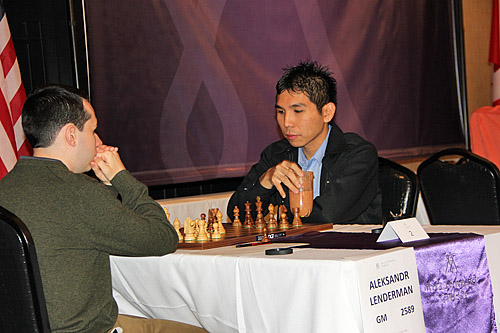 After this historic victory Wesley So moves to the #10 position on the LIVE rating list. Photo by Daaim Shabazz.

So played the most consistent chess with 6/7 performance in the preliminaries and 3-1 win over Zhou Jianchou and a 1½-½ verdict over his friend Ray Robson in the finals. Thus, he becomes the first winner of this historic tournament and will go down in the annals of history as having won the biggest prize in chess open history. In addition, he has done it while reaching the top ten. What a day for a deserving young player!