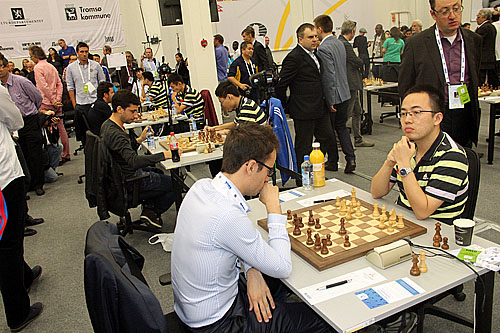 China got a key win over the French maintaining the lead.

In the penultimate round of the 2014 Chess Olympiad, there are still a number of possibilities for medals. China, Hungary and no less than eight teams are in a dead heat for the medal stand. Yu Yangyi carried China to victory maintaining the lead over Hungary who got a 3-1 verdict over Romania. The cluster of the medal aspirants includes France, Russia, the Ukraine and the USA.

Hikaru Nakamura told The Chess Drum, “SHOWTIME… for all the marbles.” While top-seed Russia cannot win a gold medal, they would like to get into position for a bronze, but even that is a remote possibility. With such a gaudy team average rating, it is certainly a disaster to not compete for the gold. It appears that one era is over and one has begun.

A similar story brews in the women’s competition. Russia was coasting with 9/9 until they suffered their first loss to the Ukraine this round. However, they hold the lead with one round remaining. The story of Russia possibly winning a third straight gold medal is a great storyline given that they were initially disqualified. In addition, they have been able to accomplish what their male counterparts have not been able to do in the last 12 years.

China only drew with Spain, but edged closer to Russia to whom they lost. They will play the Ukraine in the last round while Russia will get Bulgaria. The Ukraine needs a win to medal and Germany is also vying for the bronze. They play perennial women’s power Georgia. Tense moments ahead. 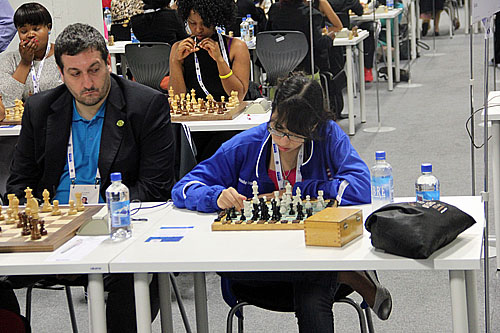 Natasha Morales is the blind player for Puerto Rico playing top board.
Photos by Daaim Shabazz.