What a wild a crazy finish of the 2014 U.S. Chess Championship!! Throughout the tournament, it did not appear that the defending champions Gata Kamsky and Irina Krush would successfully defend their title. Their play was spotty and both had scares in at least one game. However, when it came down to the title being on the line, both showed their strength and determination. 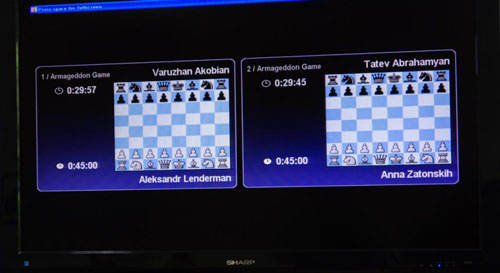 In the overall championship, Lenderman and Akobian had a rematch of their last round game. This included the color allocation… Lenderman had white with 40 minutes, Akobian had black with 30 minutes, but only needed a draw to advance. After Lenderman’s 1.c4 the game took a radically different course after the first few moves. Somehow white’s pawn sacrifice with 20.d5 seem to go awry and black responded powerfully with 20…dxc5 21.dxc6 bxc6 22.Na4 c4!

White may not have seen the ensuing attack and after playing 23.Qxc4? he was hit with the thunderbolt 23…Bxf2+! After this, the commentators showed that taking the bishop was lose quickly, but of course playing 24.Kh1 was probably the better choice.

Lenderman DID play 24.Kxf2 and the attack was swift after 24.Kxf2 Qd2+ 25.Kg1 Re2 when white is completely busted. White played a few moves amounting to pitching meat to stave off approaching crocodiles. However, Lenderman showed some class and sportsmanship by allowing a picturesque mate after 31.Qc2 Rh1+ 32.Bg1 Nxg3#. Disappointing ending but a strong showing by Lenderman.

In the matchup, Kamsky-Akobian the draw for colors gave Kamsky the black pieces. Akobian essayed the quiet Catalan and there was no noise made as Kamsky drew comfortably. 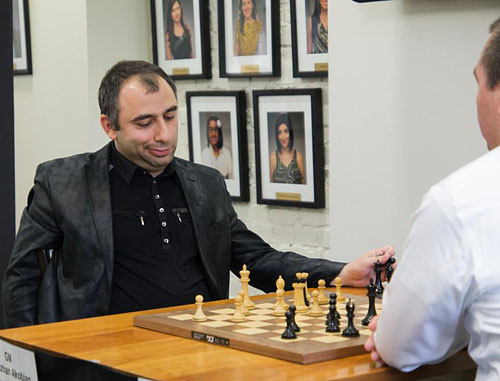 Akobian, showing disappointment, got nothing in the first game.

In the second game, Kamsky showed that the London System can be a winning opening. He crushed Josh Friedel in the last round and played it once again in the second playoff. The merits of the London System is that it sidesteps reams of analysis and white gets a playable position. Generally this favors the stronger player. 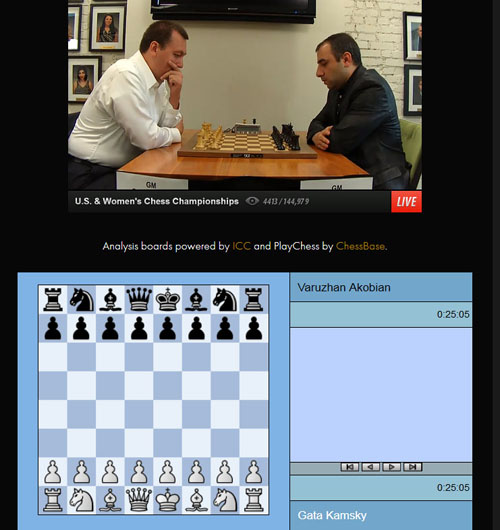 Both players prepare for an epic battle.
Millions of fans around the world tuned in.

The game went forth along normal lines until back broke with 21…c5 and white quickly seized the initiative and winning a pawn. Akobian simply miscalculated. They say mistakes come in bunches and Akobian erred with 29…Be6 allowing 30.Nxg7! winning another pawn… then another. The game was now hopeless. The game ended with a nice deflection of 37…Qc5 38.Rd8+ winning the queen for a rook. Akobian had seen enough and resigned. Susan Polgar empathized with Akobian.

I feel sorry for Akobian. He came to @websteru SPICE many times in the past few months at 7am to train. He wants this title! #uschesschamps

Nevertheless, congratulations are due to Gata Kamsky who successfully defended his title and has now earned his fifth championship crown. Kamsky did not perhaps play his best in the preliminary games and even predicted there would be a new U.S. Champion. However, he received a couple of breaks. He mentioned Akobian’s position against Lenderman in round #11 as a fortunate break allowing him to sneak to the top.

In Zatonskih-Abrahamyan, both entered a complicated line in the Nimzo-Indian feature a dubious line for black resulting in an attack on its king after 12…Nc5 (12…Nxc3) 13.Bxh7+! After 16.Nxd5! Bxd5? 17.Qxf5 black was busted (diagram). However, white bungled the attack after getting several winning positions. After 20.a4, white is simply down a piece with no mating attack.

The commentators pointed out that white should have changed the order of her moves and played 20.Rb1. After black put the “Larsen knight” on f8, white had to try another attack. She tried another sacrifice with 25.Bf6 to complicate matters. None of this worked and after black repelled white’s attack, she collected more material but forced a three-fold repetition. All that was required was a draw for her to advance. 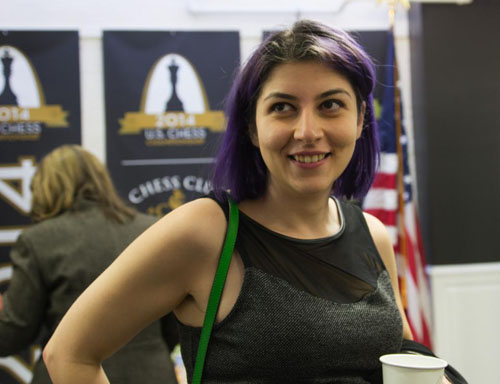 Tatev Abrahamyan was pleased to be moving to the tiebreak.

In the tiebreak, Krush chose white in the drawing and the first game was vintage. Another Nimzo, but white erred after building up an overwhelming position in the middlegame. The game went to an ending where black had a technical draw, but she did not know the drawing technique called the “Vancura Defense” and dropped the full point. Hikaru Nakamura sent a message citing a couple of example including his own game with Radjabov. 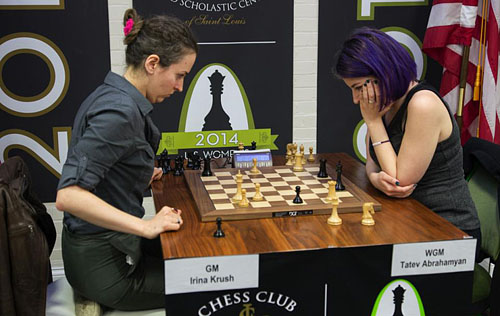 Abrahamyan could have held this game according to Nakamura.

So it was… Abrahamyan needed to win the next game in order to prolong the match. In this game Krush trotted out the Kalishnikov. Abrahamyan tried to get an attack going with 19.f4 but had nothing… until… Krush started to panic by weakening 25…f6. White kept probing trying to get at the weakened black king, but Krush held steady. Ultimately, white ended up a pawn down in a technical draw. Krush would thus agree to a draw in a three-fold repetition making her the 2014 champion.

Krush was not very glowing in the praise of her play citing a couple of situations where she was losing including against Alisa Melekhina and Viktorija Ni. However, she said that she drew on her knowledge of Biblical teaching, “Help me with my disbelief.” Certainly… we all need help given the twists and turns in this wonderful tournament. Unbelievable!