Tables have indeed turned in the U.S. Championship with a change in the top positions in both tournaments. Varuzhan Akobian dropped his decision against Sam Shankland allowing Alex Lenderman to catch him after his win over Daniel Naroditsky.

Akobian trotted out the Caro-Kann instead of his tried-and-true French. “Var” has been playing the Caro-Kann lately and the Advanced Variation in currently in fashion. This game went badly for black as white pried open the pawn fortress with 19.h4 and 20.h5 while the king was stuck in the center. The two laser bishops zipped across the board like Shaolin swords and were poised to skewer the king with 45.Bc5+. Akobian resigned.

In Lenderman-Naroditsky was a Classical King’s Indian with an imbalanced middle game. With heavy pieces on the board the position was rich with tactical possibilities. White forced the issue on the queenside and provoked a weakness of the black c-pawn. In addition, black’s king was vulnerable. Ultimately the black king was caught in a vicious net and succumbed quickly after 50.Qxh7 Bb2 51.Qg7+ when black would suffer massive losses.

Kamsky-Molner was a London System, an opening not often played at top level. Kamsky has employed it on occasion. In this game white no advantage, but ending up a pawn up in a rook ending. The ending was indeed drawing and featured an amusing ending featuring a stalemate.

Erenburg-Friedel saw a Taimanov Sicilian and black got everything he wanted in the position. It is amazing that Sicilian players strive to get …d5 in. Well… black got …d5 in and then was able to create a strong center with c5, d4, e5. This is rarely seen for black.

White was banking on getting the a2 and b3 passed pawns rolling, but donated the e5-pawn. Unfortunately, this pawn was helping to keep the black center from expanding. After that the black pawns started moving up the board like an infantry on attack and basically squashed white’s position. Those white passed pawns on a2 and b3 never got a chance to get rolling. The final position is picturesque with checkmate on the board and pawns surrounding the white king.

Timur Gareev is probably wondering what has happened in his U.S. Championship debut. He was expected to vie for the title, but he has fallen horribly. In his game against Ray Robson, he faced the Scotch which does not have the best reputation, but white got a better structure and the initiative. After 22.Rxc7 white had a slight edge and his pieces attacked from within black’s camp. The game still appeared to be equal until 41.Rd3+ Nd5?

After 42.Bxg6, black was gradually pushed back. What is amazing is that despite so little material on the board, there were still tactics on the board. White got the idea to sacrifice the exchange after 59…Nc6+ 59.Bxc6! Rxd3 60.cxb5 with passed pawns on opposite sides of the board… far too much for a rook to handle. In the finale, white had a nice deflection trick forcing a queen and black resigned. Nice!

Ramirez-Onischuk showed that Onischuk seemed to be woefully off-form and ended up a pawn down in a rook ending. With a blockade complete Onischuk secured the draw, but to grovel for a draw may show that the motivation is not there. The U.S.C.F should make the U.S. Championship the Olympiad qualifier to give players more of an incentive to play in top form. Kamsky and Onischuk have not played inspired chess as in years past.

The Krush-Zatonskih showdown was the marquee matchup of the round and would basically determine the stage for the final round. Zatonskih immediate lost a psychological battle when she took a long time to play 8…Qxd4 when it is a normal move in the position. White got a superior position at move 15 and the black king was exposed and there were several weaknesses on the queenside. Finally, black dropped a pawn and got a technically winning position. In the end, white got two connected pass pawns against the rook and converted easily. 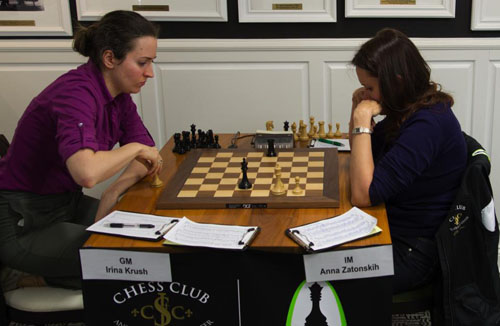 Krush ponders while reaching for queen… 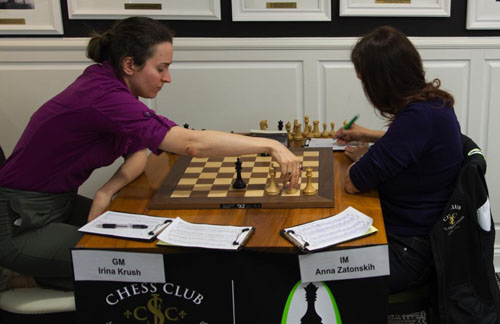 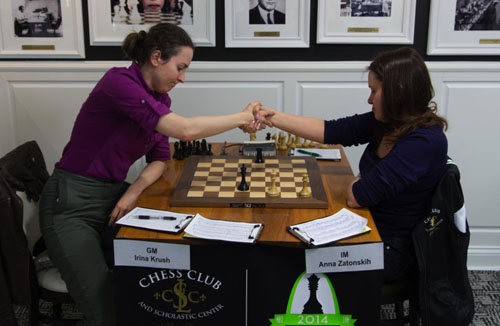 Tatev Abrahamyan got a crucial win against upstart Ashritha Eswaran and the latter played the Lowenthal variation, but never really equalized even after playing the speculative 13…Nd4!? The game went into a rook ending and black’s central pawns were forced forward, blockaded and weakened. Ultimately, Abrahamyan was able to achieve a technically winning position. White displayed good technique and round up the point.

Another Guioco Piano was seen in Nemcova-Melekhina and there were massive exchanges. By move 23, the game was already in an ending in which there were no changes for either side. Zenyuk-Baginskaite also ended without dynamism and was also drawn.

Viktorija Ni finally got her first win after getting winning positions in a couple of other games. Katerina Nemcova played in improbable 9.Ba3? a seemingly pointless move that led to her getting her pieces jumbled on the queenside. Ni plowed into white’s position with minor pieces and white was caught flat-footed. By move 16…Nf4 and 17…Bh3! Houdini had black as +4.09. White had to donate an exchange and the ensuing endgame was simply lost.