There was a brief interview of Uganda’s Ivy Amoko who will lead her team to Tromso, Norway to compete in the Chess Olympiad. In the last Olympiad in Istanbul, Turkey, she earned the title of Woman Candidate Master (WCM) and is the reigning National Ladies Champion. Her interview covered a wide range of topics in a question and answer format. Like many players, she picked up the moves at a young age, but did not take an immediate liking to the game. It was not until her adult years that the chess bug bit her.

I learnt the basics of chess when I was in primary five in 1998, but never really took it up or played. It was at University in my first year in 2007, that I decided to play for my Hall, Africa Hall in the inter hall games. I wasn’t good at it and the then University Chess captain Ssali Martin decided to train me so that I could play for the University team. I trained daily after classes and at the end of the semester, I played for the University team in the Inter University games at Mukono University and I surprisingly got a silver medal. That is pretty much where my love for chess began. 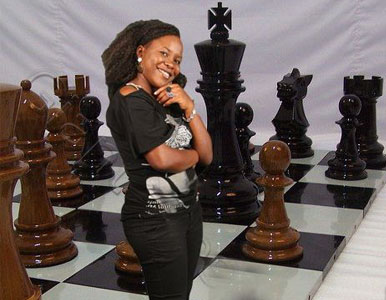 Very photogenic with an easy smile, she has compiled a resume of accomplishments including national champion in 2010 and 2014 and a chess Olympian in those same years (Khanty-Mansiysk and Tromso). The interview discussed her daily routine, her goals, her dreams, her inspirations and even a couple of nontraditional questions. 🙂