Be Someone 2014 Spring Break Camp!

Orrin ‘Checkmate’ Hudson will host his annual spring chess camp on April 7 – 11, 2014 in Stone Mountain, Georgia. He plans to someday reach one million youth. This event comes after receiving an honor from the Federal Bureau of Investigation (FBI). 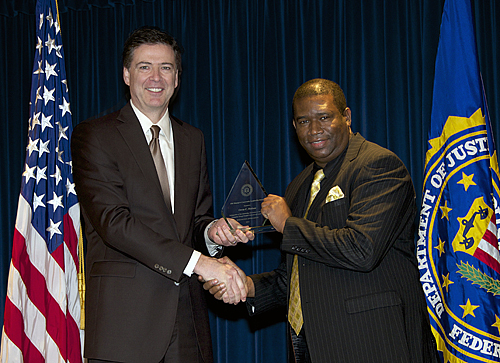 Orrin Hudson given a commendation by FBI’s James B. Comey.

FBI presented Hudson with a commendation for “exceptional success in reaching disadvantaged youth by teaching them practical skills and techniques to overcome obstacles in life, illustrated through the game of chess.” Hudson hopes to present training modules for the agents on strategy.

Since chess is akin to a battle simulation, many security and military branches are using chess as a training exercise to sharpen decision-making abilities and tactical awareness.

Hudson, “Master Motivator Teacher and Mentor”, will hold his annual Spring Break Leadership Chess Camp from Monday, April 7 through Friday, April 11, 2014 in Stone Mountain, Georgia. This week long leadership camp will be from 9:00 a.m. to 3:00 p.m. with early drop-off and late pickup available. Hudson will use his signature chess skills and abilities as he offers information, insight and advice on the importance of making every move in life count.

Hudson has trained more than 40,000 students and his goal is to reach one million youngsters as he continues to train new teachers/motivators to spread the positive life lessons learned through the game of chess. Hudson is a believer in the ‘pay it forward’ concept.

“I was a young know-it-all teenager in Alabama and I was on the road to certain destruction and possibly even a premature death, ” he readily admits. “But I had a teacher who saw potential in me, I’m not sure what that was, but he taught me the game of chess.” Hudson is quick to say that seemingly simple act “saved my life.”

“By using the game of chess, my teacher showed me that for every move I make on the chess board there are consequences,” he adds. Hudson then stresses what is the bottom line of this game. “I not only learned how to play chess but I also gained self-esteem and realized I could be someone if only I chose the right moves in my life.”

Hudson went on to serve as an Alabama State Trooper but later realized his true calling. “I knew I had to give back. I saw too many young African American males headed down the wrong path – gangs, drugs, crime, sexual irresponsibility, no education and focus -, the same path I was on until someone cared enough to set me straight.” Hudson deftly uses the thinking man’s game of chess to both teach and mentor at the same time. It is a combination that is both effective and unobtrusive.

“Responsibility, consequences for every action,
think, think, and think some more.”

“These kids love this game and it opens doors. They often are surprised that they can handle the game that many educated adults shy away from, but more importantly they naturally learn life-lessons along the way.” Hudson rattles off some of those skills, “Responsibility, consequences for every action, think, think, and think some more.” He counsels them that they are important just as they are and that they hold unlimited potential inside. Working from his Atlanta training site, Hudson can often be found moving back and forth from multiple chess boards making moves and offering advice at the same time. It is apparent to any and all that he cares personally for each one of his students.

The young people who have had the good fortune to cross his path often say Hudson has been a guiding light in their lives as he has helped them learn how to solve problems and overcome challenges. “Successful people are not people without problems,” he stresses, “they are people who learn to solve their problems.” This is the lesson Hudson so adamantly teaches with his Be Someone program. He is resolute in his prediction. “We will reach these teens through this game and teach them how to think on their feet. They will be somebody and we will all win because of it!” 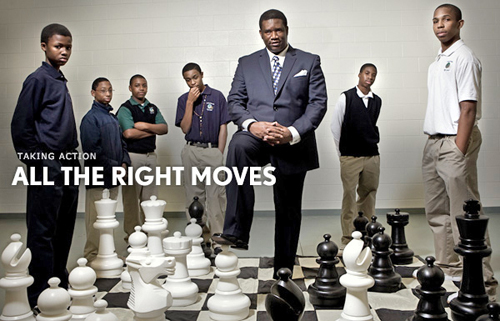 Hudson seems to have a saying for every circumstance. From his new facility in the shadow of famous Stone Mountain, Hudson often encourages many young people intently studying the chess board in front of them with something like this, “Every wall is a door every obstacle is an opportunity. That’s how you have to look at life. Attitude is everything.” It really is music to these young ears.

For more details about the “Spring Break Chess Camp” contact,