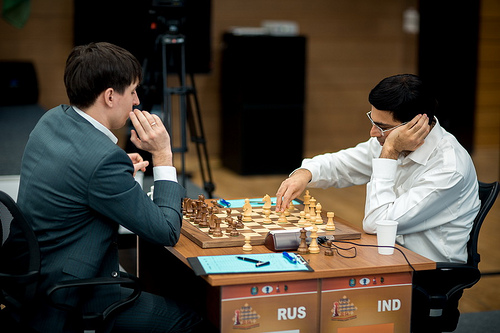 Anand almost scored a full point against Andreikin. Fantastic game!
This is the Anand people have been missing.

With Viswanathan Anand in the driver’s seat of the tournament, other players are still aiming for personal goals. With each round, it appears more and more likely that we will see a rematch between Anand and new World Champion, Magnus Carlsen. In today’s games, Anand had an overwhelming position and nearly clinched the tournament, but will have to wait until after the rest day.

Meanwhile Veselin Topalov won his game to trade places with Peter Svidler, the wildcard nominee. Many fans in the chess world are still scoffing at the fact that several of the top players were overlooked for the wildcard spot given to Svidler. Certainly fans would have gotten quite a thrill to see Hikaru Nakamura, Fabiano Caruana or Maxime Vachier-Lagrave as new blood in the championship cycle. 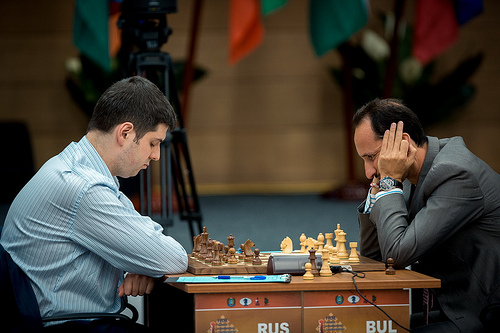 Topalov displays the intensity that made him one of the world’s most feared players. Photos by FIDE.com.

In the next Candidate’s tournament several of the current players will not be back. This may be Vladimir Kramnik’s last run for the title as well as Topalov and Svidler… all have struggled mightily. Today, Veselin Topalov played an excellent positional game in a Taimanov Sicilian. White mounted pressure throughout and black simply collapsed under pressure. With the win Topalov finally gets out of last position.

The other two games were drawn, but Shakhriyar Mamedyarov nearly got the full point against Sergey Karjakin after getting a strong attack. The young Ukrainian held on and kept his tournament hopes alive before facing Anand in the crucial penultimate round.

Ashley Statement on the Millionaire Open