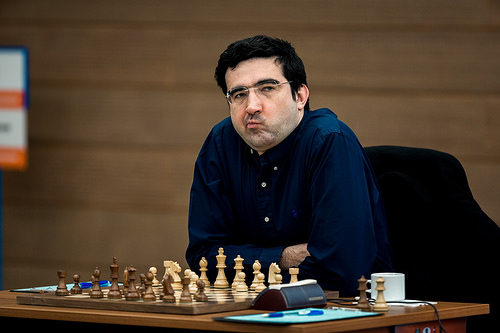 A befuddled Vladimir Kramnik seems at a loss for his uneven play losing against a Dutch game.

Vladimir Kramnik started a new era after beating Garry Kasparov in the famed match in 2000. That seems so long ago, but he seem to become rejuvenated after a stretch of bad results. He won the World Cup to qualify for the Candidates tournament, but has hit a rough patch losing today after a horrible blunder against Peter Svidler. This loss effectively eliminated him from contention as he trails by two full points with only five games remaining.

These types of games are devastating because Kramnik had outplayed Svidler throughout the game and his pieces were well-coordinated. However, a quick lapse of attention occurred after 32.Rc4-d4?? when Svidler’s bishop zapped the pawn on h2 netting an exchange. All of a sudden Kramnik was dead lost.

In the post-mortem press conference, Kramnik rightfully thought he was winning and that his experiment 1. d4 f5 2. Nf3 Nf6 3. e3!? b6!? 4. d5!? was a success. He was partially right as his 4.d5!? move tried to take advantage of the black’s neglect of the center. Nevertheless, Svidler corralled the point and sent Kramnik into the doldrums.

Anand-Mamedyarov was an interesting encounter. Anand essayed the atypical 6.h3 against the Najdorf, a less-active treatment against the fighting defense. In fact, it appeared that the Azeri player came out on top fine in the opening. He had a Godzilla knight on e5 and dynamic play with his strong play on dark squares. However, white stifled play along the c-file and grabbed a bit of space. However the game ended after black had develop a solid juggernaut with very good flexibility.

Karjakin-Andreikin also saw an interesting try. Against the Taimanov, Karjakin tried the rare 6. Nxc6 bxc6 7. Qd3!? However, the conversation was short and the game turned into a queenless ending. Neither side tested the resulting position and went for a three-fold repetition.

Aronian-Topalov had tremendous tension and Aronian has a playable position before he admittedly ceded control with 24.Qd1? An off-form Topalov lost patience with 30.g5?! and the Armenian was able to establish a fortress draw against black’s more active pieces.