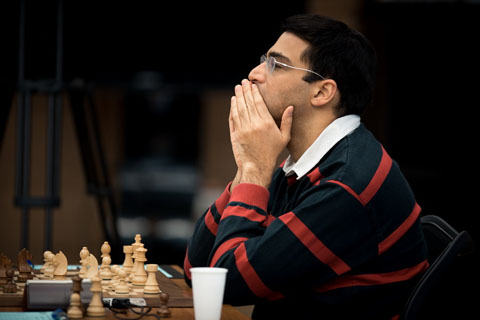 Viswanathan Anand won a beautiful game
against Veselin Topalov in a Najdorf.
Photo by FIDE.com.

Just when you thought we had moved on from middle-aged dominance, Viswanathan Anand has proven that there is still one more stand left before the Carlsen-led youth movement begins. It just so happens that Anand won his game today putting him in a good position to get a rematch with Magnus Carlsen. He leads the field by one point after beating a struggling Veselin Topalov.

Meanwhile, Aronian lost against a surging Shahkriyar Mamedyarov meaning that he would have to make up 1.5 points to overtake Anand since he has inferior tiebreaks. Sergey Karjakin did upset a fading Vladimir Kramnik who lost a full point in the standings. Andreikin-Svidler had a rather placid draw and the Russian quartet of players seems to be lagging behind. Since half the players in the field are Russian, failing to win would be disastrous.

One Response to “World Candidates 2014-9: Anand bolts ahead!”