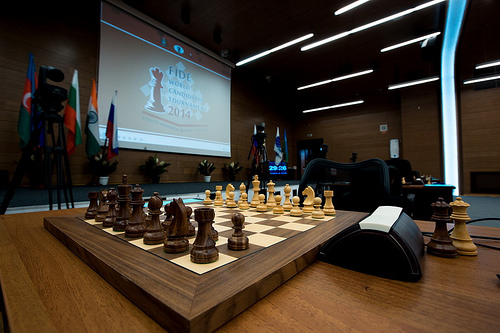 Peter Svidler’s selection as a wildcard in the Candidate’s caused a minor controversy when it left higher-rated players out of the competition. However, there was no doubt that the 7-time Russian belonged in this elite field. He proved his mettle by dispatching of former World Champion Veselin Topalov in a sharp queenless battle. The opening featured novel play with a pawn sacrifice and a middlegame clash of minor pieces exploded as white maintained an initiative against the cornered black king. Here is an account given by GM Alejandro Ramirez.

A powerful game by Svidler, but the most exciting game was Kramnik-Aronian which went down to king versus king. Both players are expected to compete near the top of the charts for the right to challenge Magnus Carlsen.

After Kramnik’s 22. f5!, the Armenian played a very risky move of 22…g5? The Russian got a very promising attacking position with optimally placed pieces aimed at the weakened black king. White then broke with 27.d5! and the space advantage and when it appeared that black would collapse, he played an opportunistic queen sacrifice after 30…Rc2! 31.Nf6+ Qxf6! to drum up counterplay.

The point was after 32.Bxf6 e2 black has succeeded in complicating matters. However, he almost threw away his counterplay after 33…Bxd5?! but keep white tied up long enough to prevent further damage to his position. There was a novel conclusion of the game as in the postmortem, they analyzing various rook and pawn endgames. Very instructive!

Both Andreikin-Anand and Karjakin-Mamedyarov were rather uneventful draws petering out into placid rook endings. 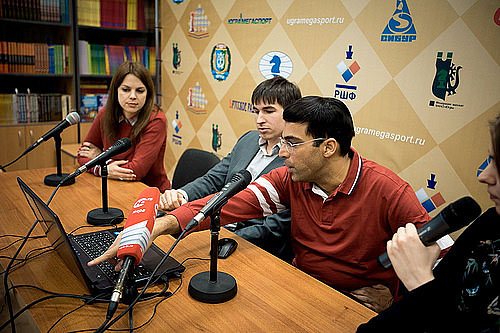 Anand seems to be in good form. Will he hold onto his slim lead?
Photos by FIDE.com.