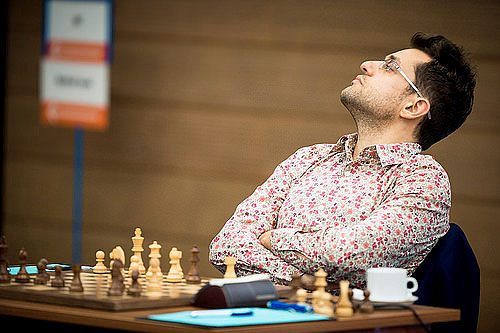 Levon Aronian is back on track with an impressive victory over Peter Svidler. Aronian lost his first game against Viswanathan Anand and fans were wondering whether the Armenian would flame out of yet another important tournament. Of course not. This is a very long tournament and the way the tournament is going, things could change rapidly.

Aronian played a novel game out of a main line in the Grunfeld. In fact, Aronian had played the same line against Alexander Grischuk, but made no progress. In this line, black grabbed material and his queen was chased around the board. Aronian seized the initiative after he uncorked 22.Bxf7+! (diagram #1) drawing the black king from his cover of pawns. 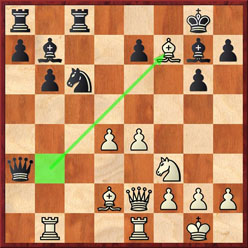 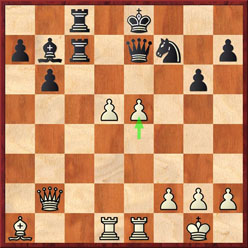 It appeared that Svidler was walking a tightrope and that white’s menacing pawns and active pieces would overwhelm his forces at any moment. After 33.e5 (diagram #2), Aronian’s pawns were rolling up the board, but the Russian was holding by a thread. However, the Russian started to unravel and found himself is a stifling bind. After mutual errors were exchanged Aronian found the knockout punch with 57.Ree6. Svidler’s king never rested after the sacrifice.

Shahkriyar Mamedyarov bounced back after the break to win a nice game against Dmitri Andreikin. The Russian blundered in a tense position with clocks winding down. That put Mamedyarov on the scoreboard for his first win and relegated Andreikin to last place still looking for his first win.

Anand-Kramnik was a fascinating game, but it appeared to be a long series of prepared moves. The opening sacrifice after 11…Qxc3+ was challenge by black’s centralized king. However, the monarch remained on e8 the entire game and was never in danger. In fact, it was the white king doing a dance… a three-fold repetition was reached a draw agreed.

Nothing going on in Karjakin-Topalov as the pieces flew off the board and the game ended with a black queen versus two white rooks and bunch of pawns.