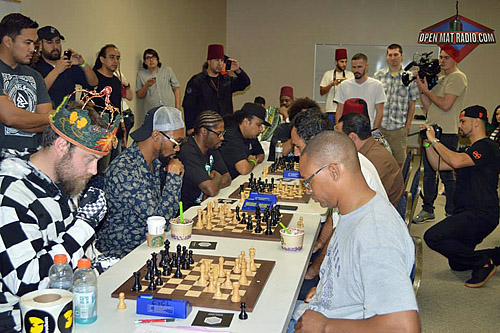 Hip-Hop Chess Federation Founder, Adisa “The Bishop” Banjoko stated “The HHCF would like to congratulate RZA on winning the 2014 Chess Kings Invitational. RZA defended his title with the focus of a Shaolin Monk. Additionally, our Mind Over Matter panel proved beyond a shadow of a doubt that educators, artists, chess and martial arts can benefit at-risk teens and kids through sharing new ideas. “ RZA and the HHCF raised 5k to benefit an after school chess program at Santee High School in South Central Los Angeles. The program is expected to launch in the next few weeks.

The Mind Over Matter panel featured RZA, actor Emilio Rivera from Sons of Anarchy, Dr. Martin Gomez Principal of Santee High, Dr. Sergio Flores Director of Partnership for LA Schools, Rakaa Iriscience of Dilated Peoples, and LA Chessboxing Champion Andrew McGregor. The panelists discussed how Hip-Hop, chess and martial arts can lead American youth to unity, strategy and nonviolence. FULL AUDIO OF RZA’s talk on the Mind Over Matter Panel can be heard in its entirety at The Journey Podcast.

RZA, who also serves as the Director of Outreach for HHCF stated:

“It was an honor to do battle and emerge victorious at the Chess Kings Invitational in LA. It was great to share ideas on blending music and math to reach the youth. I believe the conversations on our panel can open some peoples eyes.We hope to share the educational power of fusing Hip-Hop, chess and martial arts with even more people next year.” 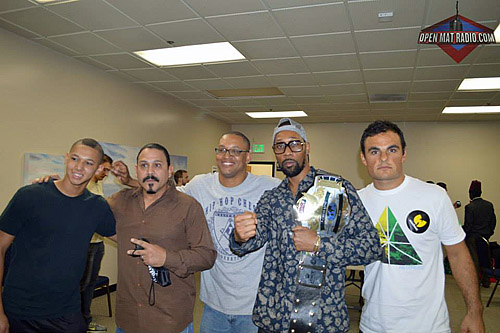 In related news, the HHCF recently released Street Games Vol. 1 hosted by DJ Rob Flow and A-Plus of Hieroglyphics. Street Games Vol. 1 is a profanity free mixtape about the connections between Hip-Hop Chess and martial arts. It includes “A Technical Flow” by Kalhi feat. UFC coach Ryron Gracie, “64 Squares in the Cipher” by Sunspot Jonz, Zumbi and Rakaa Iriscience, “The Chess Clock” by Quadir Lateef and Jasiri X, and “The Maurice Piece,” a tribute to the first Black Grandmaster of chess, Maurice Ashley.

Artists like RZA and GZA from Wu-Tang Clan, The Jacka, Immortal Technique, Asheru, Zion I, DJ Qbert, Dilated Peoples, Hieroglyphics and many others have participated in their events. Founder Adisa Banjoko has presented at Harvard University and World Chess Hall of Fame on how chess, martial arts and music promote peace in the streets in 2013. Visit their official website at www.hiphopchessfederation.org.

Visit www.BishopChronicles.com today and LISTEN to some of the coolest interviews in entertainment, business strategy and technology on the net. Connect with me on www.linkedin.com/in/abanjoko.

Posted in Hip-Hop, USA | No Comments