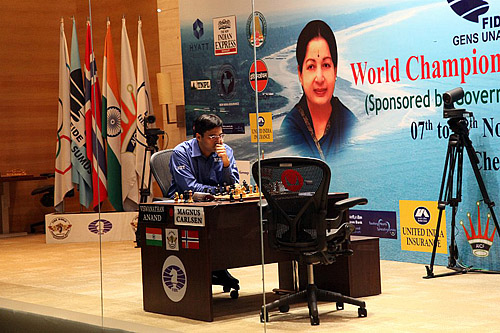 Another pre-game rumination by Anand… trying to stir up motivation.
Photo by Anastasia Karlovich.

Fans and commentators were clamoring for a Najdorf Sicilian to challenge Magnus Carlsen’s two-point bulge in the eighth game of the match. What did they get? Anand took a page out of John F. Kennedy’s archives and seemed to have replied, “Ich bin ein Berliner.”

The World Champion trotted out the Berlin Defense but Carlsen was fully prepared. There was one line that the players pointed out 23…Qg5 h4! (or f4!), but Anand played 23…Qd8 and the game petered out into a picturesque pawn ending that was completely symmetrical.

Just in case you were curious… “Ich bin ein Berliner!”