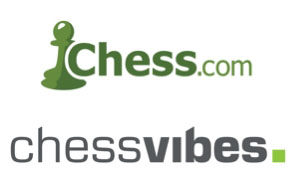 Last week, Peter Doggers of Chessvibes.com released a statement that his company was being purchased by chess.com. It was an announcement that had caught many by surprise, but had been in the works for the better part of a month. As negotiations flowed, the main details were determined and Doggers will be on full-time with chess.com. FM Mike Klein has told The Chess Drum last month that he was working for chess.com full-time.

Thus, the chess world is consolidating and it appears as if chess.com is becoming the Google of the chess world. There are some detractors who bristle at the move stating that it diminishes the independent voice that many had come to expect. Although all the details have not been worked out, it will be an interesting venture. The Chess Drum’s Daaim Shabazz had a chance to ask Peter Doggers some questions about his work with Chessvibes and the subsequent transaction chess.com.

Peter Doggers: I started a blog on 6 February 2006, with the idea to publish some of my own games, so that my friends and I could discuss it in the comments below the post. This never really got off the ground, and instead I started to write about interesting chess news & games I saw. This was nice to do, and I got a modest audience rather quickly. Especially when I started doing videos, my site got popular fast. Then I decided to add an English version for all the articles (alongside the Dutch version), then I named it ChessVibes on January 1st, 2007 and then I started making videos from the press room in Wijk aan Zee, and boom! I had 15,000 unique visitors every day there.

Keeping tracking of all the news and reporting on it day after day, month after month, year after year was both a continuing challenge, and at the same time the thing I liked the most. Often the urge to bring the news quickly and properly was so strong that it was more that the site (and my readers) kept me going instead of the other way around!

What comes to mind is my videos at the Amber tournaments, my (video) interviews with top players (e.g. two long ones with Anand), but also my critical, independent reporting on chess politics, which is kind of lacking at other online chess media. But there’s a lot of little things, like Boris Gelfand telling you that he tries to solve the Endgame Study every week. That’s just great.

Yes and no. I’ve managed to make a living from ChessVibes for six years, which was more than I expected when I started. (“Let’s see where I am after one year,” was what I thought when I quit my fulltime job in November 2007!) But on the other hand I always had the idea that one day the advertisement on the site would fully pay the costs of the editorial board, so that it would be more or less self-sustaining. That proved to be too optimistic, at least in the world of chess.

Quality, in one word, reached by perfectionism on my side. From the start, I tried to strive for high quality in terms of content, but also in terms of design of the site and my magazines, and I think I succeeded. Arne Moll writes very nice columns, and still I often discuss them with him and together we make them even better. The same for the book reviews. 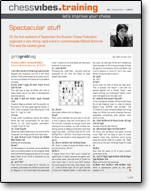 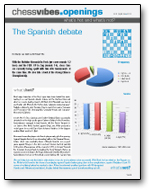 José Diaz is the best cartoonist there is. And working with Macauley Peterson helped me to improve the technical side of my videos (e.g. sound and image quality). Generally, I think the level of websites, and journalism, in the chess world can be improved, and I always tried to do better than others, not because I wanted to be better, but because I think chess deserves better.

Besides, the signal I’m getting from my readers is that over the years they’ve immensely enjoyed the open debate in the comments section. Even strong GMs told me that they read all the comments! Unfortunately, recently the level of the discussion has taken a dive, with quite a few trolls who only leave very negative, sexist or sometimes racist comments.

In the last couple of months I had to remove more comments than before. I think this is how it goes with many big forums on the internet; at a certain point many people stop posting comments, and from that point onward only a small group (e.g. 1%) of the readers are posting most (e.g. 90%) of comments, and because there’s only a few names that pop up frequently, there will be people who don’t like them and they start trolling.

Yeah, a bit. I know my readers, they’re very critical, as they should be. 🙂 What I didn’t expect is that quite a few people dislike chess.com a lot, but usually the negative people take the time to react, while many people who like ChessVibes or Chess.com, or are neutral, don’t bother to leave a comment. It’s always like this, there’s always a lot of complaining and too little positive criticism. Besides, many people have something against big companies on principle.

My title is Director of Content, and I am sharing this title with Mike Klein, a U.S. based, prize winning journalist who also started working full time for Chess.com. I will do most of the news coverage, however. So in that sense I will keep on doing what I did! But I will have more responsibilities, such as editing and management tasks, and building on my network in Europe, obviously. 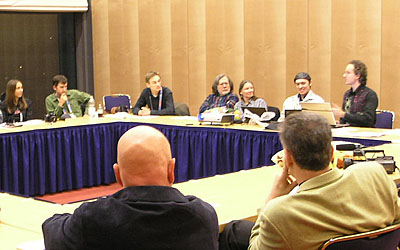 The great thing is that they are actually happy for me to keep on working from my home in Amsterdam, because they want me to continue visiting top tournaments and these are held mostly in Europe. And, it’s quite useful for them to now have someone in the European time zone as well!

As far as the chess world is concerned, I can’t actually recall another website that was bought by a bigger company, but maybe I’m wrong. In any case, all I can tell you is that during the negotiations the Chess.com staff made it clear that they like my reporting, and that they do not intend to influence it. So in that sense, I should be able to continue reporting independently and with more (financial) resources available, there’s certainly room for (more) creativity!

Actually we haven’t decided on this 100% yet.

We haven’t seriously discussed it because we came to terms rather quickly concerning the current “variation”.

No, not related. But the fact that it was Mike Klein who took over for me WAS related of course. By then it was clear that we would be closing the deal soon, so it made sense to have someone already working for Chess.com helping me out. 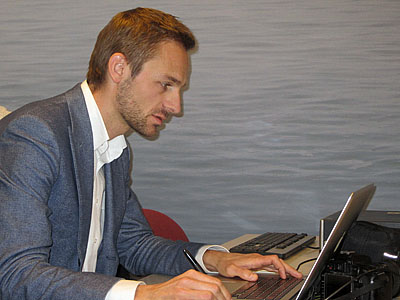 Please don’t see this as the end of ChessVibes. See this as a bright future for chess reporting, where almost anything you liked about ChessVibes will be continued at a bigger place, with more resources and opportunities for me as a journalist and with lots of fun services for you, like a tactics trainer, strategy articles & videos and blogs for the chess fans. And if you’re not interested in all this, remember that you can always just read the news and leave comments (and play chess online!) totally for free at Chess.com!