Tanzanian Chess Federation held its first major tournament (2013 Tanzania Open) in many years and it attracted players from surrounding countries and as far away as England and Romania. In fact, it was the Brit who won the tournament and it was none other than GM Nigel Short who remarked he was pleased to win with the “maximum score” (6/6). 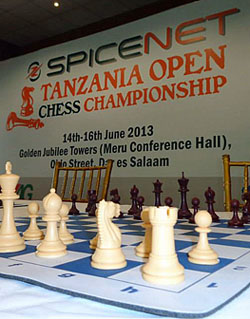 While Short was never threatened he did mention that he last two games were challenging. Both Kenya’s Nathan Ateka and Uganda’s IM Elijah Emojong tested the legendary player and dragged the battle to the ending. Short remarked that Emojong could have been drawn, but the difficulty in finding moves under time pressure was too great.

Nevertheless, the newly-minted IM Emojong ended on 5/6 and has cemented his place as one of the top player in East Africa. Also in joint second on 5/6 were Kelvin Chumfwa (Zambia), Haruna Nsubuga (Uganda) and Keepthamsh Reddy (India). Reddy upset WGM Alina L’Ami (Romania) in the last round. There were 69 players registered with 32 Tanzanians and the largest traveling contingent coming from Kenya with 13. Uganda sent five players and they took home 2nd and 4th places.

In an interview conducted by Brian Kidula, Nathan Ateka stated that the standard of organization was “world-class” and he was glad to see Tanzania come into the fold to give East Africa a stronger circuit. Incidentally, Tanzania is not a current FIDE member, but this event will certainly raise the profile for chess in the country. 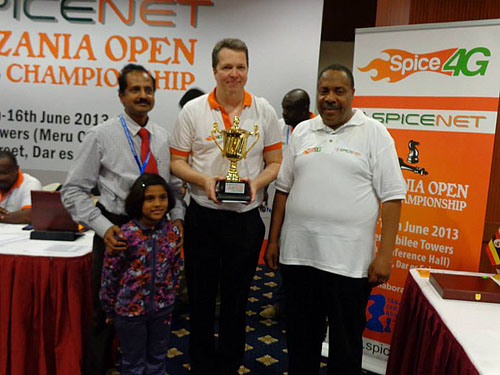 The tournament appeared to have good conditions and FIDE Vice President Lewis Ncube deemed it a “great success”. Short’s presence increased the public interest and excitement of the players and six players had an opportunity to play a chess Grandmaster perhaps for the first time. Ncube stated that there is potential to attract more attention to Africa as a destination for top level events.