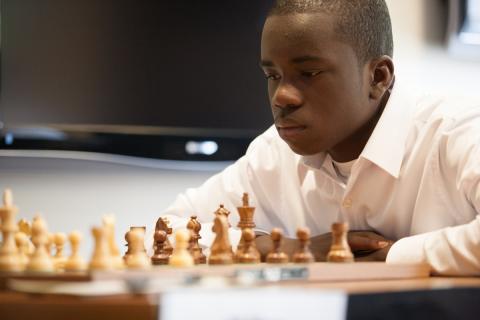 Last weekend, Justus Williams won the 2013 U.S. Junior Open for perhaps his biggest individual win to date. The under-21 field had 27 competitors including eight National Masters. This competition is not the same as the U.S. Junior Closed which will take place June 13th-23rd in St. Louis. This tournament was open to all juniors (boys and girls) nationwide under the age of 21 and held in Tarrytown, New York May 31st-June 2nd.

Williams clinched the title with 5/6 by splitting the point with Andrew Ng in the last round. Deepak Aaron beat top-seed Josh Colas to move into joint second with Ng, Jarod Pamatmat and Andrew Tang all on 4.5/6. Rounding out the top scores were Jake Miller in 6th on 4/6. Colas, Akshat Chandra, Christopher Wu, Nicolas Checa and Jared Goldfarb finished 7th-11th with 3.5/6.