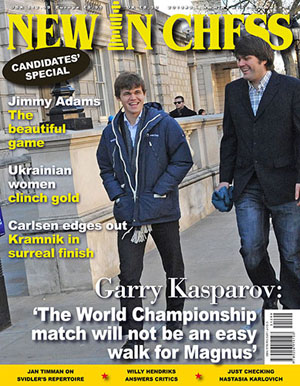 Once again Magnus Carlsen is the cover story of the latest New in Chess. Carlsen has become a regular cover story of NIC… seemingly every few issues. Perhaps he has gotten used to being the new “Cover Boy” of chess and gracing billboards doesn’t hurt his exposure either.

After his ascendancy as the world’s top-rated player, he has now gained notoriety as a media ambassador for chess, or “Caissa’s Darling”. Recently, Carlsen was voted as one of the sexiest men of 2013 of British Cosmopolitan. This is a revelation since no chess player has had this fashion appeal since Bobby Fischer. Carlsen seems to be milking it for all its worth and still does modeling shoots with G-Star Raw clothier.

In this issue, there were some very interesting insights on the World Candidates tournament (won by Carlsen) and its implications for the pending World Championship match against World Champion Viswanthan Anand in November. This feature is perhaps different in that it does not continue to focus on Carlsen’s exploits as much as fantasizing about the upcoming match.

Garry Kasparov weighed in on the match and made some candid comments including a debunk of those picking Carlsen in a “walk-over”. He asserts that there are cracks in Carlsen’s chess makeup that could cause a problem against such an experienced match player. He also discussed Carlsen’s performance at the tournament and discussed alternative ways to decide the Challenger including a six-game match between top two finishers. Interesting reading.

The Candidates’ Tournament was followed by millions and the coverage was first-rate. In this issue are several annotated games by GM Anish Giri, who has become a favorite in the way he tells the game story.

“Those who say that Magnus will win easily against Anand are doing him a great disservice.”

One story that got a lot of attention in the chess world was the Reyjavik Open. It was written by winner Pavel Eljanov who was perhaps given the space to clear his name of any improprieties by offering a three-move draw with Wesley So of the Philippines. Eljanov’s calculation that such a result (a draw) would give him a 95% chance of winning the tournament was met with a tremendous firestorm. Here is his account:

The next day what happened, happened. Wesley, indicating his desire to play the Grunfeld, offer me a draw after the move 3…d5. Without thinking for very long I accepted the offer. Peter Doggers of ChessVibes (together with Ian Rogers – they were reporting on the tournament) was one of the first to congratulate me on my victor in the tournament immediately after the end of that short game. I was slightly embarrassed and told him that “I was prepared to play a little”. Even then I had kind of an unpleasant aftertaste after the draw.

The first person to ‘start throwing strones’ at Wesley and me was Polish grandmaster Mateusz Bartel. Right after my game ended he started a discussion on Facebook in which we were condemned rather harshly.

The story continues with GM Ian Rogers scathing attack on the game on Chess Life Online after which a later response was tendered in New in Chess by Dirk Jan ten Geuzendam. After a volley of competing letters, Eljanov goes forth to set the record straight. He starts with an apology to chess fans, gives his rationale and then attempts to refute Rogers. It is an interesting war of words.

Another account was the Women’s World Team Championship won by Ukraine… in reality an upset over China and Russia. What was more intriguing was Anna Ushenina’s abdication of her right to play top board. Instead she deferred to Kateryna Lahno, who is higher rated. There has been a bit of quietude on the issue of Ushenina’s position as champion. She has not made much of a media impact after winning the title.

Nevertheless, she steamrolled her competition, won a silver board medal helping lead her country to victory. The issue of the women’s cycle will be revisited, but perhaps it would be louder if a #25 player from an unheralded country would have won. Nevertheless, the Ukrainians can revel in the fact that they have the Women’s World Champion, the gold medal in 2013 Women’s Team and bronze medal in 2012 Olympiad, quite an impressive run. Ushenina will defend her title against Hou Yifan in September.