Preview: Big round here. An underachieving Alexander Grischuk, who a year earlier shocked the world by winning the drawfest qualifier, will face the surging Magnus Carlsen. With only four rounds remaining, only three players remain in contention and any win can turn the tide. The other five players will be playing without undue pressure and can take chances. Upsets loom.

Teimour Radjabov can be a tremendous obstacle and he is still #4 in the world and can play at a high level. Peter Svidler will be a tough out for Levon Aronian… both are in good form. The Ivanchuk-Gelfand match is not important, but intriguing nevertheless. The fans will see if the Ukrainian can complete a game without forfeiting on time. If he forfeits another game, then many questions will swirl. This has never happened to him before. 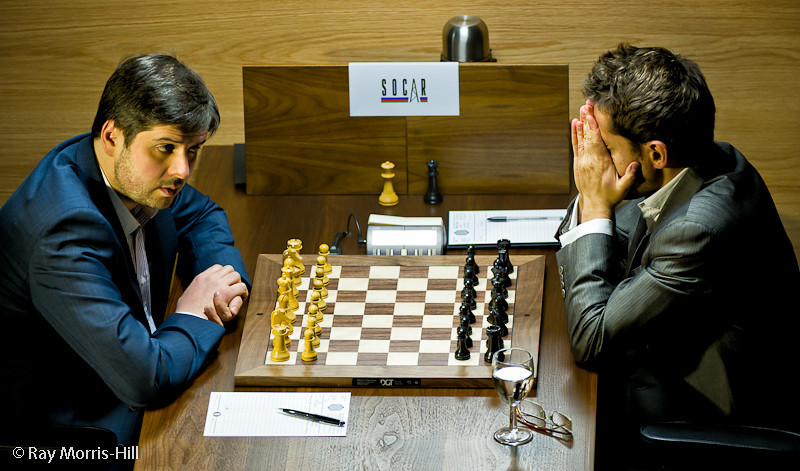 Peter Svidler set to face Levon Aronian. Was this photo an expression of things to come? Photo by Ray Morris-Hill.

Overview: While it was Magnus Carlsen’s day to get a quick result, he had to watch as Vladimir Kramnik inched closer with a win over Teimour Radjabov who is basically playing for his pride. This game resembled so many in that Radjabov went for the King’s Indian but the game steered into different terrain.

The game was not characteristic of the closed battles featuring a white queenside march and a black kingside assault… it was wide open. However, Kramnik’s bishop had free reign of the board and chased the queen around gaining time. Then Kramnik lowered the boom with 33.Nxe7+! winning the exchange since the knight is poison due to 33…Rxe7+ 34.Qc8+ Bf8 35.Rb8 and massive material losses to follow. So Kramnik pulled within a half-point leaping over Levon Aronian who lost.

Svidler-Aronian was a key battle and white got all he wanted in the opening. While Svidler stated that his advantage was slight and black should have been fine, white had so much space after 22.c5. Like a cornered animal, Aronian lashed out with 22…g5?? Svidler suggested 22…g6, but after the text move black’s position quickly went south. They say mistakes come in bunches. On 23.c6! Aronian played 23…b5? and Svidler quickly transferred the focus to the weakened kingside and finally hit Aronian with a bodyshot 33.Bg6+! clearing the path for the f-pawn. In the final position, black was totally helpless.

In a game of no consequence, Ivanchuk-Gelfand played 17 moves, so it does not warrant much analysis.