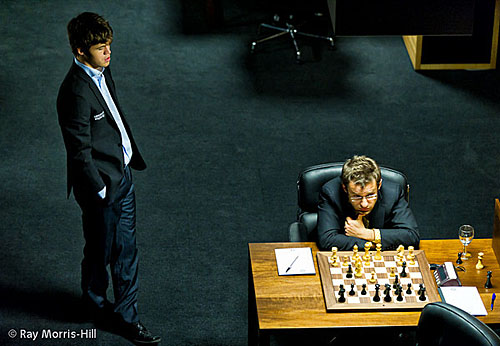 Magnus Carlsen keeping an eye out on his nearest competition,
Levon Aronian. Photo by Ray Morris-Hill.

Overview: Today was a pivotal turn as only three players have a realistic chance of winning the tournament. Magnus Carlsen, Levon Aronian and Vladimir Kramnik have made the final stage of the tournament a three-horse race as each won their games today.

Carlsen faced a resurgent Boris Gelfand whom he defeated in round three. In this game, Carlsen trotted out the Rossolimo Attack, an opening which he undoubtedly made improvements on after getting a horrible position against Teimour Radjabov after 4.Bxc6. Gelfand also came up with a novelty as black against Viswanathan Anand’s 4.Bxc6 bxc6 5.b3 e5!? so this would be a good discussion. However, Carlsen certainly did not want to test Gelfand’s preparation
and opted for 4.O-O instead. 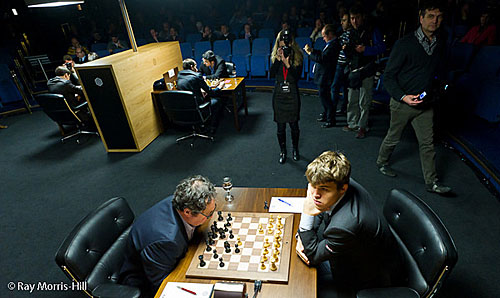 White got a very comfortable position and developed fluidly while Gelfand’s black queen started wandering from her army. While she was away, Black’s forces soon came under assault and the queen would remain imprisoned behind enemy lines for the rest of the game. There were a number of backrank weaknesses that prevented black from being more aggressive. 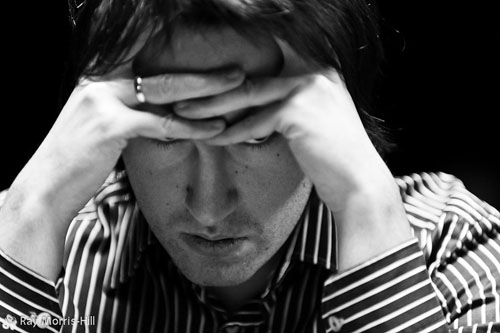 Teimour Radjabov may be lurking in last place, but he can be a dangerous “spoiler”. Beware. Photo by Ray Morris-Hill.

Levon Aronian got a victory when a beleaguered Vassily Ivanchuk forfeited for the fourth time. IM Lawrence Trent pointed out that these occurrences are not merely time scrambles, but with ten moves short! In this game, Ivanchuk played the improbable Budapest Defense after 1. d4 Nf6 2. c4 e5 3. dxe5 Ng4 this line has often been used for shock value and certainly Aronian could not have expected such a move.

These types of openings are rarely played at this level and there is a reason why… the gambit did not yield black any initiative. Aronian played 26.g4 Rf4 27.Bf5 attempting to cut off black defenses while launching and attack after 27…Nd5 28.Rh3. This was not dangerous, but with zeitnot creeping up, the Ukrainian blundered with 28…Rh8? and after 29.e3 gxf5 30.exf4 and black flagged in a completely losing position. Shame.

Perhaps the most instructive game was Grischuk-Kramnik as the resulting endgame will no doubt end up in endgame books and databases from henceforth. After a discussion in the Berlin Defense, Kramnik came out with a much better pawn structure and this was made apparent later on. White was forced to go in a losing ending after 29…Nd4! 30.Bxd4 cxd4. In the diagram, black would simply win opposition as white’s pawn structure was totally overextended. Black protected passed pawn served as a diversion and white lost his kingside. Nice technique!

In Radjabov-Svidler there wasn’t much of a discussion in the Grunfeld and a repetition of moves occurred after move 21.