University of Texas at Dallas (UTD) won yet another Pan-Am Intercollegiate tournament. This makes the ninth time in history that the satellite campus has won the tournament tying the record with University of Maryland-Baltimore County (UMBC). While rated behind Webster’s powerful “A” team, UTD showed a bit more consistency and it played in their favor in the tiebreaking system.

There was actually a five-way tie for first with UTD, Webster University (A and B), UMBC being joined by the surprising performance of University of Illinois (U of I). This powerful Big Ten school outpaced the more powerful programs such as Texas Tech and University of Texas-Brownsville (UTB) The sensation of the tournament, the team had an average rating of only 2156, but got a breakout performance by 2011 High School Champion Eric Rosen.

The freshman from Skokie, Illinois and Niles North High School led the Illini on the top board, but was given more than ample support by an overachieving trio of players. Luo Xin (1999) scored a perfect 6/6 including a win over WIM Katerian Nemcova (2293) of University of Texas-Brownsville (UTB). Aakaash Meduri (2093) beat Max Cornejo (2461) the same match. Thus four schools will travel to Washington, DC to compete for the Final Four title in April. Webster had two teams in the top four, but they can only send one team for the tournament.

The tournament had 44 teams which was an increase over previous years, but still not a match for the glory years during the “Fischer Boom” which saw 108 teams at the Pan-Ams in 1972, 73 in 1973, 89 in 1974, 123 in 1975 and 108 in 1976 (Wikipedia). Those tournaments were dominated by Harvard, University of Chicago and University of Toronto, but so much has changed. The schools are rebuilding and the most dominant schools are the satellite campuses and small private schools.

It is an interesting trend and it bodes well for the growth of chess as the well-heeled schools will feel more pressure to crush the less prestigious campus. Texas is by far the most competitive state in terms of collegiate chess, but Missouri may be starting a trend with Webster, Lindenwood and Washington University which are all in the St. Louis area. This provides these schools with access to the Chess Club and Scholastic Center of St. Louis, the marquee chess club which sits across from the World Chess Hall of Fame. 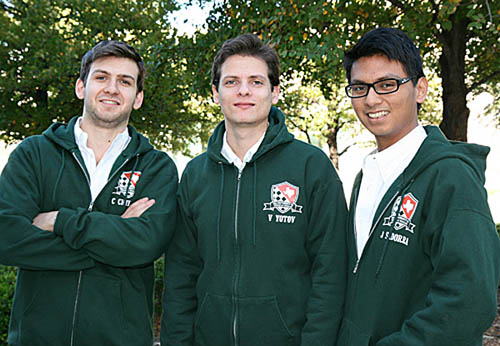 Grandmasters Cristian Chirila (Romania), Valentin Yotov (Bulgarian) and Julio Sadorra (Philippines) of the winning UTD program. International students have fueled the success of the strongest chess programs. UTD has had approximately 20 GMs and IMs in a hugely successful experiment which sprouted from a basic chess club. Photo by UTD.

Another trend is the increasing strength of the tournament. What the tournament lacks in the number of teams it makes up for it in the strength. Nearly 20 GMs participated with the top several top teams having at least two. Webster-A had five and the winning UTD had four! There schools are especially active in recruiting international students as well as the cream of the American scholastic high schools through scholarships and other incentives. It is great that the gap between chess and academia has closed.

There was a time when you had to make a choice between school or chess. Many of the marquee programs like UMBC, UTD and Webster have found a formula over the years that is successful. Let’s hope this becomes the golden era of collegiate chess.