The University of the West Indies Mona is set to compete at the Pan American Intercollegiate Chess Championships, which will take place December 27-30 in Newark, New Jersey. The prestigious tournament, which has a long-standing history of over 60 years, will feature the best university and college chess teams from North America and the Caribbean, including several Grand Masters.

The UWI will be represented by the four highest rated players at any educational institution in the island according to FIDE, the world governing organization for chess. This includes 2012 CARIFTA Champion Stuart James who was recently awarded the title of National Master, in addition to Candidate Masters Paul Brooks, Miguel Asher and Zachary Ramsay. 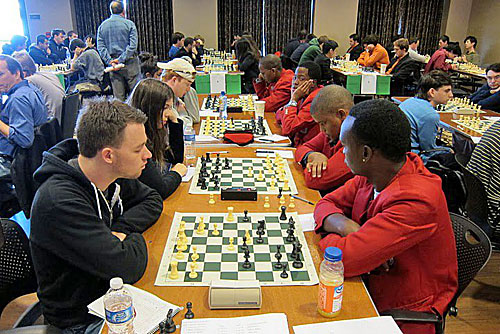 The team will be aiming to claim the coveted prize of ‘best international team’ which is awarded to the top team outside of North America. The main competitors will be the very experienced University of Toronto, however a new challenge will also be welcomed from the University of Technology (Jamaica) who will be participating in the event for the first time. Toronto will be led by an International Master, which is the second highest title awarded by FIDE.

The trip was made possible by the support of the Office of the Vice Chancellor, and is another positive step in developing the intellectual and sporting culture at the UWI.