One of the joys of playing chess during one’s youth is certainly the camaraderie and friendships that are made during the formative years. Scholastic tournaments are always brimming with excitement and provides one with the joys of chess and pleasant memories to come.

What happens after scholastic chess in America? Generally, players abandon the game to focus on intense studies and college activities. Most colleges and universities do not have chess programs, but for those that do, the Pan-Am Intercollegiate tournament is the one activity that reignites the excitement. 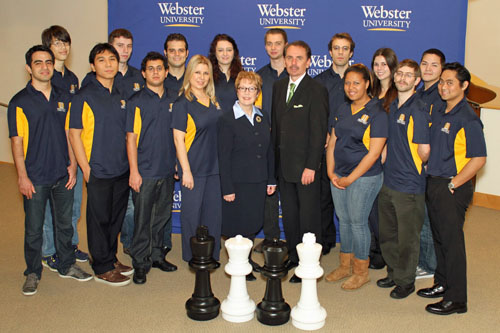 Webster University, the subject of an interesting story!

Held in December during the school break, the Pan-Am tournament was founded in 1946 and features teams from North and South America and the Caribbean. In the past two decades, three teams have come to dominate the proceedings: defending champion Texas Tech, University of Maryland-Baltimore and University of Texas-Dallas. Princeton University will play host to this year’s event.

However, a new university will be making its debut. Since all players from Texas Tech transferred to Webster University this year, they will be the odds-on favorites at this year’s tournament. They boast eight Grandmasters including Georg Meier (Germany), Wesley So (Philippines), Manuel Leon-Hoyos (Mexico), Fidel Corrales-Jimenez (Cuba) and Ray Robson (USA). There are also teams from University of Toronto (an perennial participant), Jamaica’s University Technology (UTECH) and usually a team from Peru.

Organizers are expecting about 40 four-player teams for the six-round tournament. The field has approximately 20 GMs(!), a dozen IMs and a host of other titled players. The top four teams will advance to the President’s Cup which is to be held in April of next year.

Live commentary featuring GM Ronen Har-Zvi, in cooperation with the Internet Chess Club, and produced by Macauley Peterson, will be broadcasted on Livestream.com/PanAmChess. Results and pairings will be posted regularly on the tournament website: https://monroi.com/2012-pan-american-intercollegiate-chess-championship-home.html. Information about registration and housing is also posted on the website.

Darrian Robinson @ U. of Chicago

U. West Indies (Jamaica) at Pan-Ams!