The Jamaica Chess Open took place recently at the Negril Escape Resort and Spa. The event, which is the flagship open tournament of the Jamaica Chess Federation, was staged outside of Kingston for the first time in over a decade. The ultimate goal is to spread chess, the fastest growing sport in Jamaica, to all fourteen parishes. 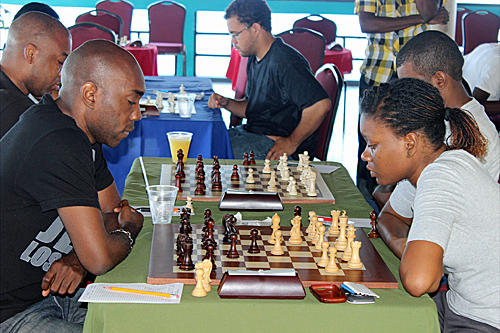 Warren Elliott (front, left) was held to a draw by Deborah Porter (front, right) at the 2012 Jamaica Chess Open, however Elliott defeated the rest of his opponents to claim first place.

In the section for intermediate level players, Kevin Merritt won with a perfect score of five points from five games while Donavon Merritt, Nathan Belifante and Rochelle Porter shared second place with 4 points each.

Queston Warren was crowned the top amateur after securing an immaculate score of six points from six games in the ‘Amateur Section’. Oneil White, Nathalene Gardner and Davini Tulsie trailed closely behind and tied for second place.

The tournament was sponsored by the Negril Escape Resort and Spa, the Rockhouse Hotel, the Magnificent Chess Foundation, FIDE Master Grantel Gibbs and the Westmoreland Chess Association which was officially launched at the event.