When you think of Seattle, what comes to mind? Maybe Starbucks, Microsoft and the space needle, right? Well… it is a nice city with a lot of great places such as the Fisherman’s Wharf and the birthplace of famous icons such as the legendary guitarist Jimi Hendrix. However, there have been many other arts that have found a home in Seattle and chess is one of them.

Yasser Seirawan put the city on the map as one of the world’s elite players in the 80s. There was Erik Andersen’s America Foundation for Chess host the U.S. Championships through 2007. Perhaps Seattle is getting another boost from a local Master. 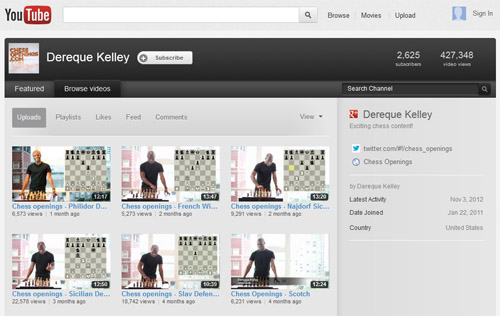 National Master Dereque Kelley of chessopenings.com has produced a number of useful videos explaining basic opening principles. His approach is simple and his explanations are clear which are aided by a viewer-friendly format. Kelley covers a number of topical openings including the Najdorf Sicilian, Slav, French Winawer, King’s Gambit, Caro-Kann and even the Vienna Game. His videos can be found on YouTube, Google+ and Dailymotion. Following are a few of his sessions: