Shahade, also the U.S. Chess League founder, has decided to create a format to provide the most talents U.S. juniors with access to GM instructor and the study rigor to shore up specific weak areas. After a disappointing showing at the U.S. Cadet, this may be what will bring Black to the next level.

According to the story at U.S. Online…

“James Black earned high marks for his work ethic: He studies three hours on school days, six hours on summer days or weekends. He studies GM games, solves endgame training positions, and plays through games in New in Chess or Chessbase magazine. When Greg asked him about his weaknesses, James was unsure; this started a recurring theme throughout the week with basically every student. Greg tries to have students identify weaknesses as specifically as possible, so that they will be able to rectify them through training and study.” 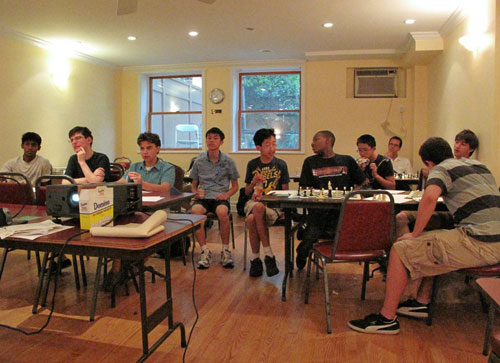 In the 80s and 90s, emigres from the former Soviet Union started to enter the U.S. and proceeded to dominate for 20 years. It appears that this era is coming to and end and a new generation of native-born talent is being developed. With the success of national team members Hikaru Nakamura, Robert Hess and Ray Robson, the U.S. seems to be bursting at the seams with a wave of 21st century talent.

Players like newly-minted Grandmaster Marc Arnold, and International Master Daniel Naroditsky as well as the up-and-coming Josh Colas and Justus Williams means that the future seems bright. Black is also in that number and hopefully this opportunity will help him reap the fruits of his labor. With scholastic chess booming and “Brooklyn Castle” guaranteed to bring positive exposure (and perhaps funding), chess may be in for another boom.