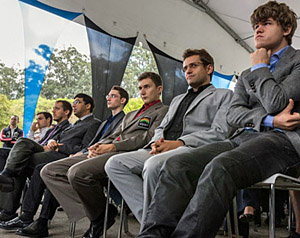 The event will take part in a partnership event that will be divided between two venues… Sao Paulo, Brazil and Bilbao, Spain. Last year saw Carlsen edge out the field with a late flurry catching Vassily Ivanchuk and winning the tiebreak match.

This double round robin event will again invoke the Sofia Rules which includes the modified scoring of three points for a win and one point for a draw. The primary time control will be 40 moves in 90 minutes followed by 60 minutes with 10 seconds increment. In addition, there will be no draw offers unless an arbiter is consulted.

The story may be the rise of Caruana who has entered the top ten and at this time last year was at #32 at 2712. His meteoric rise may have been overlooked in lieu of contemporaries such as Carlsen, Teimour Radjabov, Hikaru Nakamura and Karjakin, but he is firmly ensconced into the elite.

Carlsen, on the other hand, skipped the Olympiad and he along with Anand will be playing into form against a well-prepared Aronian and a hungry Vallejo-Pons who is looking to do even more damage than the three wins he got last year. Anand will try to dispel the notion that he cannot win an elite event.