On The Chess Drum’s first day on site at the 40th Chess Olympiad, nothing could convey the electricity in the air more than being person and feeling the tension of the pending battles. Armenia-Russia was the battle of the day as a throng of people crowded around the board in anticipation. Meanwhile, Levon Aronian was in a good mood and could be seen joking with Sergei Movesesian and keeping everyone relaxed. It would be these two games that would turn decisive. 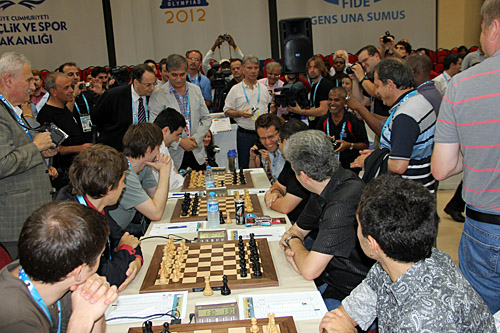 Armenia and Russia fought to a contentious 2-2 draw.
Photo by Daaim Shabazz.

A buzz reverberated in the press room as Jonathan Speelman had stated that Aronian had resigned! In the aftermath, Kramnik totally dismantled Aronian in a game featuring a deft exchange sacrifice paralyzing black. This was an energetic game moving Russia up 1-nil. However, Movesesian-Grischuk was an even more bloodstained battle with pieces flying about the board and the Armenian finally getting to Grischuk’s black king. Karjakin-Akopian had already drawn and Sargissian-Jakovenko scored a draw in a long battle.

In Azerbaijan-Croatia, the only blood spilled was Croatia’s as Teimour Radjabov and Shahkriyar Mamedyarov scored brutal attacks on the black king for the two-point victory. In Germany-USA, the struggles continue for the Americans as they have drawn three matches in a row. The match was hard fought on all four boards with Hikaru Nakamura trotting out the Modern Defense. While it is still along tournament, the USA hopes to get back on the winning track against host Turkey.

Spain toppled the Czech Republic scoring wins on boards one and four. Spain has quietly worked their way back into the upper echelon. In what can be billed as an upset, the Philippines (led by 21-year Olympiad veteran Eugenio Torre) beat Bulgaria in a triumph for Asia.

Torre was able to hold the dangerous theoretician Ivan Cheparinov despite the huge rating disparity. Oliver Barbosa scored the win against Kiril Georgiev for the margin. China is also back into contention with a mauling of Bosnia and Herzegovina 3½-½.

China-Russia was heavily anticipated and the Chinese women wanted to avenge the defeat of the men. The teams traded wins on the top two boards with Hou Yifan (right) beating Tatiana Kosintseva in a Marshall Gambit. However, the lead would not hold for long.

Nadezhda Kosintseva beat Zhao Xue after refuting a piece sacrifice and finishing the game with an attack of her own. Russia retakes the top position along with Poland while Georgia, Ukraine, France and Vietnam also won moving into the top sphere.