After a spectacular opening, the wait is over and the fireworks in Istanbul have begun! In the Olympiad, the first round usually pits the strong and mighty against the weak and humble. However, in the days of databases and powerful engines, players can come to the board well-prepared against stronger opposition. The preparation may reduce the gap by as much as 100-150 ELO points as players rated 300-400 points can remain competitive until move 30 or 40. 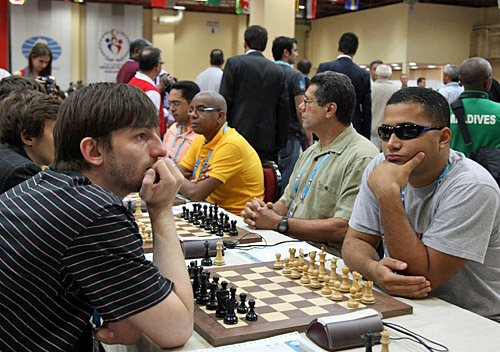 IM Lisandro Munoz (right) failed to get the first round upset this year. Grischuk certainly looked at the Dominican’s win against Smeets in Khanty-Mansisyk.

Russia beat the Dominican Republic 3½-½, but gave up a crucial half-point when GM Evgeny Tomoshevsky (2730) was held by FM William Puntier (2312). Of course rating is not the only factor helping weaker players. If a match is well in hand, stronger players may be encouraged to take a draw instead of squeezing a win to save energy for stronger teams. Time will tell whether this will make a difference. Other top teams cruised to comfortable victories.

While the Ukraine blanked Iraq in a repeat from 2010, Armenia also gave up a crucial point when GM Sergei Movsesian (2698) gave up the full point to Bolivian Grandmaster Osvaldo Zambrana (2471). Top teams need to compile big scores in order to build their tiebreak scores. Armenia is now 1-point out. Also giving up a point was Hungary from Kyrgyzstan.

Malaysia held the Netherlands close before losing by the slimmest of margins 2½-1½. IM Tze-Meng Mok upset Loek Van Wely as the worn out pun “bad luck for Loek” rises again. There was buzzing around the hall in the France-Zambia match as Stanley Chumfwa seemed poised to snatch a full point from Wang Yue. Daniel Jere was also in a long battle with Wang Hao. In the end, Wang Yue staved off a loss while Wang Hao bested Jere in an explosive game. This match was closer than the score indicated. 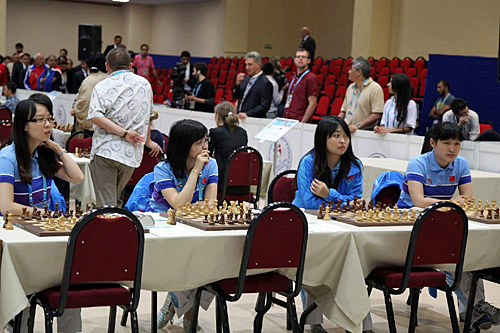 Russia has begun the defense of their gold medal with an easy 4-nil victory over Bolivia. Nadezhda Kosintseva sat out the first round. China blasted Asian counterpart Bangladesh 4-0 with World Champion Hou Yifan sitting. Georgia, USA, India, Poland also had easy victories, but Armenia (like their male counterparts) gave up a point losing on board #2.

The women’s field will be in some ways more predictable than the open field given that the talent pool is not as deep. Out of 62 matches played in the first round, there were 46 matches ending in 4-0. There were few board upsets, the largest being a 518-point upset of Costa Rica’s Maria Rodriguez (1738) over Marina Makropoulou (2256) of Greece. We will have to wait until rounds three and four to see the more competitive matches in the women’s field.