Chicago has lost another chess personality. Ronald “Ron” Washington, 61, died on Friday, July 27th after being pulled from Lake Michigan fully clothed in an apparent drowning. Washington was apparently swept into the water and caught in a rip current. He was found a few hundred feet from the North Avenue Beach’s “Chess Pavilion” where he spent the better part of 20 years taking on all comers. 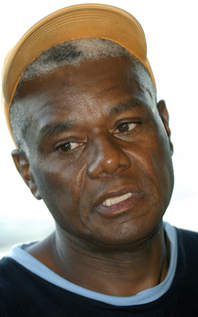 According to news reports, Washington was pulled from the lake near North Avenue Beach at Burton Place at 1:45pm, officials said. He was rushed to Northwestern Memorial Hospital in “very critical” condition where he was later pronounced dead. The news of his sudden death came as a shock since he was apparently in good spirits. The death was reported in the Chicago area news and ruled as accidental. No further details were given about his death. Another person was pulled from the lake the same day, but survived.

Local area Master Frederick Rhine told The Chess Drum, “Ron’s death is a great tragedy. He was one of the most memorable and beloved figures in Chicago chess. No one loved the game more than Ron.” With chess players there are always stories to be told… some melodramatic, some reflective and some funny. Rhine recalled a funny story:

Ron was playing Black in a tournament game against Ed Perlmutter. The game went 1.d4 Nf6 2.c4 e6 3.Nf3 Bb4+ 4.Bd2 Ke7??? 5.Bxb4+ Kxb4!?! At this point Ed of course pointed out that the piece on b4 was Ron’s king!! Poor Ron had such a hangdog expression that Ed very kindly let him substitute the intended 4…Qe7 and continue the game. Ed managed to eventually win anyway.

To Chicagoland chess players, Ron was a familiar face in chess circles. While Ron did not always approve of the term “hustler,” he admitted that the games he played were for small stakes and stated jokingly that he has been able to get all of the money back that he had lost in chess over the years. If one questions why a 61-year old man would spend his life playing pickup games on the beach, Ron would have an answer for them.

In life you gotta do what you like doing otherwise life is not worth living. What the hell you’re going to do… go home and watch TV? Everybody does that. You gotta do what you like doing. You’ll get out of bed. If you like doing it, you’ll get out of bed. If you don’t like doing it, you’ll stay at home. You’ll say, ‘I’m not going to work today’… because you don’t like what you’re doing. Once you enjoy your work, everything else works. Yeah. That’s how I look at it. To me, Chess Pavilion is a great place to be… for those who want to come. This is kind of life I want to live… so it depends on what you like in life.

He was the subject of a news story done back in 2007 by the Chicago Reader’s Ted Cox. In the story, Ron intimates that he began playing sometime before the “Fischer Boom” in the 70s. He quipped that he couldn’t wait on the Fischer Boom to start playing! He actually learned chess from his barber at age 14 in Louisiana. Cox’s story gives a candid look at Ron’s good-hearted nature. Ron was a tall and stately-looking man with a full crown of gray hair. He had aged gracefully. Many may recall Ron’s affable personality and his hearty laugh. This was depicted perfectly in this documentary done on him in 2010.

Washington last recorded rating was 1978 USCF with a peak of over 2100, but he was not a consistent tournament competitor in recent years. He preferred the fast and furious nature of “blitz” or five-minute games, but at one time tried his hand at organizing. Back in the mid-70s and early-80s, he was the proprietor of the Chess and Backgammon Club on the northside where he hosted a variety of blitz events and regular club hours. Local area Master Fred Rhine recalls the times,

I think it was at 1024 N. State in Chicago. The first tournament I won (as I recall, I tied for first at 4-1 in the under-1800 section when I was still rated 1500-something) was at his place, I think in 1975 when I was almost 15. He also had great round-robin 5-minute tournaments there every week, where I played players like three-time Wisconsin State Champion Charles Weldon and Judge George Leighton (still going strong at 99). I also tried hustling players there in the summer of 1977, without much success. The prospective marks threw nickels around like they were manhole covers. But one memorable 3-minute game from that summer went 1.d4 Nf6 2.Nc3 d5 3.Bg5 c5 4.Bxf6 exf6 5.dxc5 d4 6.Ne4 Bf5 7.Ng3? Bxc5! 8.Nxf5 Qa5+ 9.c3 dxc3 10.b4 Bxb4 11.Qc2 Qxf5! 12.Qxf5 d2#! Ron’s shop eventually went under, unfortunately, like so many other Chicago chess venues.

According to David Franklin, there had been a small memorial one day after his death. In his memory, the entire chess community will be holding a memorial on Friday, August 3rd, at 5:00pm, at the North Avenue Beach Chess Pavilion. There will certainly be a lot of stories shared. Ron’s presence at the Chess Pavilion will be sorely missed.

Ron Washington’s friends pay him a tribute at the Chess Pavilion.

Ron’s board and a position of his beloved English Opening.
Photos courtesy of David Franklin.