The second half of the World Championship match started with two decisive results and today the world witnessed an elegant ebb and flow with white pressing for a win. In the end, the world champion set up an impenetrable fortress and a draw was agreed in 49 moves.

The game started as a Nimzo-Indian and the changes in repertoire are coming quickly. Perhaps teams are still preparing secret weapons, but this game was nearly a big win for Gelfand. Anand mentioned that he had made some mistakes in the opening by ceding the two bishops. Certainly white had an advantage in space and mobility and black was balancing the position on a razor’s edge.

The big decision came when white forged ahead with 19.c5!? Anand had seen this after the previous move and he had to be prepared to give up his queen. On cue, he continued with 19…bxc5 20.dxc5 Rxc5 21.Bh7+ Kxh7 22.Rxd6 Rxc1+ 23.Rd1. Gelfand has a queen for a rook, knight and pawn, but it wasn’t clear how he would press for a win. The main idea was to push the a-pawn to a6 and play Qb7 at some point causing black to tie down his forces. White would then attempt to create weaknesses on the kingside with moves like g4. 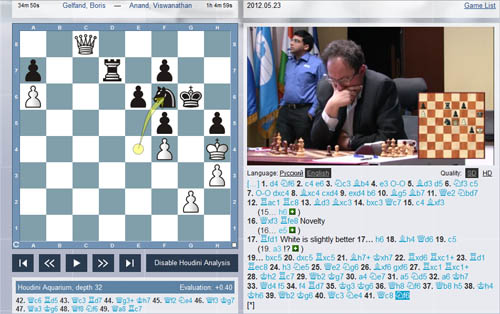 Viswanathan Anand paces the floor while Boris Gelfand ruminates. White pressed for the win, but black was defiant. Photo from screenshot at https://moscow2012.fide.com.

In the press conference, Anand mentioned that he had several fortresses to choose from, but chose the Rc7, Nd5 structure. White probed and probed, looking for any type of slip up. One would have been on 43.g4 hxg4 44.hxg4 Nxg4?? when white wins a rook after 45.Qg8+ Kh6 46.Qg5+ and 47.Qxe7. The problem is that the black rook can never leave the 7th rank and it also has to stop the white king from crossing the c-file.