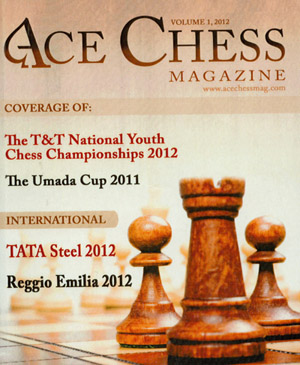 National chess champion FM Ryan Harper, assisted by ex-champion Marcus Joseph, has again made chess history, but this time not over the chessboard. Instead, the two stalwarts have jointly launched the country’s first chess magazine, Ace Chess, intended primarily to serve the Caribbean chess community.

In his foreword, publisher Harper gives the raison d’etre for this pioneering effort. He notes the significant evolution of chess in the region over recent years. The CCA and CACDEC, for example, have “changed the landscape.” There are now more junior tournaments; the Sagicor Open in Barbados and now the Carifta Chess Games recently held in Port-of-Spain. On the open side of things, he notes, Caribbean players have opportunities at the Sub Zonals to fight for IM and FIDE Master titles.

This magazine will try its best to cover many of these Caribbean and wider regional tournaments with the hope that it strengthens chess within the Caribbean.

There are also opportunities at the Continental Open to gain IM norms. Barbados has its annual Heroes Day Masters and Cup, Suriname its Rotary Open, Jamaica its Jamaica Open and now T&T its Open International. Also there is the UMADA Cup which is expected to be held in Suriname this year. “This magazine,” says Harper, “will try its best to cover many of these Caribbean and wider regional tournaments with the hope that it strengthens chess within the Caribbean.”

Double Rooks sincerely welcomes the intent and effort behind this pioneering effort. While sources of information on this globally expanding sport have multiplied with the advance of technology, the game in the Caribbean has been developing to the point where it may require its own focus of attention and concentration, a continuing relevant survey of regional chess action as an aid to the process of appreciation and growth.

10th Annual "Be Someone" coming!