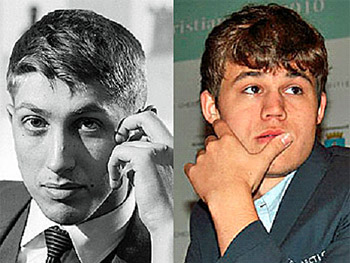 In the 1972 60 Minutes interview with Mike Wallace, then-championship challenger Bobby Fischer stated that he like to “crush a man’s ego”. He then played Boris Spassky for the World Chess Championship and beat the Soviet player mercilessly even after forfeiting the second game and falling behind 2-0. Fischer had reached his zenith and never played competitive chess after that due to his own idiosyncrasies and sometimes unreasonable demands.

After years of being banned from his own country, shuttling around the Philippines and being abused in a Japanese prison, he settled in Iceland and lived out the last days of his life quietly before succumbing to a liver ailment. Fischer story has been recounted and the recent movie “Bobby Fischer Against the World” captures his evolution, but unfortunately many still focus on his post-chess era.

It is this circumstance that will cause young players like Carlsen and America’s top player Hikaru Nakamura to ponder ways to avoid falling prey to the same fate. Both draw Fischer comparisons for different reasons, but both have proven they have a variety of interests outside of chess.

While one may want to prove they are not as single-minded as Fischer, former World Champion Garry Kasparov chided both Carlsen and Nakamura for not being focused enough. He had training relations with both that ended relatively unfavorably. He did not believe Carlsen’s modeling helped his chess and was not keen on Nakamura’s debut in the World Series of Poker.

Watching the two films segments, the parallels the interviews draw between Fischer and Carlsen are stunning. Both had prodigious memories… both did what was required to get an edge… both had an unbreakable will to win… both were shown being rather isolated… both seem socially awkward in interviews.

In last Sunday’s 60 Minutes segment with Bob Simon, Carlsen was asked a question about Fischer. The young Norwegian said that as he watched the Fischer movie, he wondered, “Is this going to be me… in a few years?” He quickly assures Simon that it will not. Carlsen rise is similar to Fischer’s. Both were “boy wonders”… both met a meteoric rise… both were world beaters. However one fact remains… Carlsen has yet to play for the World Championship and his success will largely be measured by winning the world title.

Carlsen will have plenty of company, but his battle would not be facing a single behemoth as Fischer did against the Soviet Union. There is quite a bit of diversity in the field with players like Teimour Radjabov (Azerbaijan), Hikaru Nakamura (USA), Fabiano Caruana (Italy), Anish Giri (Netherlands). Perhaps the biggest threat to Carlsen is Levon Aronian of Armenia who has remained hidden under the shadow of Carlsen, current World Champion Viswanathan Anand and former World Champion Vladimir Kramnik. Aronian is only a mere nine points behind Carlsen on the Live Ratings.

One of the qualities that Carlsen has is his ability to remain calm and to remain psychologically ready for the pending battle. However, Carlsen has never played in a match. This may be an Achilles heel, but certainly it was not Fischer’s. Fischer enjoyed the challenge of outperforming an entire institution. Carlsen also works alone, but takes a more carefree approach to chess. He has a variety of interests as opposed to the single-minded determination of Fischer. One may argue that this is what is needed to ascend to highest heights of chess.

While Carlsen is not far from Fischer’s resting place, it is doubtful that he will look to the American champion’s history for inspiration. Carlsen is his own man… in his own world, with his father as his confidante. This is quite a different world from Fischer. Time will tell whether we will be able to write more comparisons in the Fischer, but listening to the interview, Carlsen is probably bristling at such thoughts.

(Note: Thanks to Laura Kuhn of CBS for contacting The Chess Drum to encourage the use of the videos!)