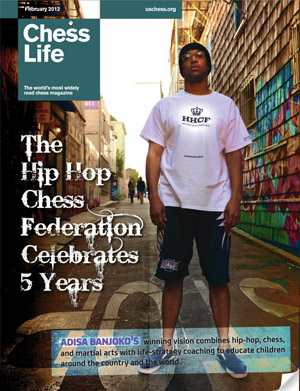 Banjoko was recently featured on the cover of U.S. Chess Life in a lengthy prose about the organization’s vision and subsequent challenges. It is primarily a historical description of HHCF’s activities from inception to the present.

The chess world is unfamiliar with the HHCF as the organization’s activities have been confined largely to the Bay area. When talking to Banjoko he often mentions this discord in somewhat of a defensive way. Here is why:

Banjoko says he’s often misunderstood by stodgy traditionalists in the chess world, who point to the fact that he’ not a master, grandmaster or even a competitive player, and use that as an excuse to disparage his organization. “When you mention the Hip-Hop Chess Federation,” he says, “people will kind of chuckle, and they do it from a place of arrogance and ignorance.”

Certainly, but that may be true of non-chess enthusiasts as well since hip-hop and chess are often viewed as polar opposites. Perhaps Banjoko would do best to educate those on his vision and this article may assist in that effort.

Banjoko has also been interview by Forbes Online and gave a very poignant interview about the fusion of chess, martial arts and hip-hop. His philosophical outlook represents a fresh and enlightening perspective that we have not seen. 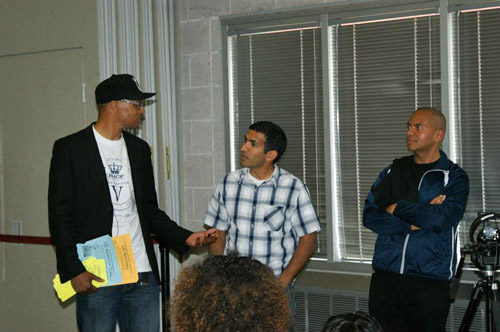 While the HHCF is not the first to fuse hip-hop and chess, at five years, it is more than a “flash-in-the-pan” and appears to have found a niche. After the “V-Day” one wonders what is next for the HHCF. Banjoko speaks of expanding and apparently has a chapter in Romania of all places.

There is certainly a caution to expanding so quickly without developing a foundation at home, but he hopes to continue promoting his fusion philosophy in the hopes to teach the principles of non-violence and civility.

"The Drum Beat" is coming!