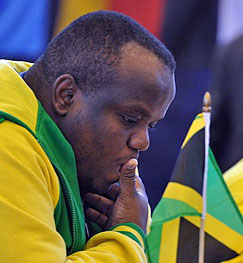 Jamaican Master Duane Rowe (2236) competed in the 2012 Gibraltar Festival in the Masters Section. While Gibraltar was won by Nigel Short on tiebreaks, it was Hou Yifan who was the talk of the tournament.

Rowe participated in two tournaments… the Masters and the Challengers. He played a total of 18 games (+12=3-3). He was able to participate in this spectacle and witness a historic the Hou-Polgar game and Hou’s blistering performance.

The Jamaican Master, who is an engineer by training, annotated his last round game against Israeli IM, Danny Raznikov. The game was an exciting English and erupted into an interesting battle. He wrote,

This was the final round of the Gibraltar Masters and I needed at least a draw to end the tournament with a plus score. I had the black pieces against an Israeli IM, Danny Raznikov, who had a rating of exactly 200 elo above mine. Coincidentally, in the previous round of the tournament, I finished my game early and went to observe the 80 years old lengend GM Viktor Korchnoi in action, who was “schooling” his much younger adversary — which happened to have been IM Raznikov. In the fashion of Jamaica’s journeyman, CM Humphrey Gayle, it is obvious that “Korchnoi soft’en him up fi me!