Jamaica’s Chess Federation (JCF) President Ian Wilkinson is an ultimate connoisseur of chess with a love of its history and a purist in terms of chess appreciation. He has tirelessly led the JCF for the past several years and making strides to harness the talent of rising junior players as the veterans wind down their careers.

Then just a few minutes post the tile-popping restart of the tournament, yet another unexpected event happened as play on board one between NM Davy and young star Shreyas Smith of Calabar High came to an effortless end after six moves. NM Davy, needing only half a point to secure the top place in the tournament, offered Smith a draw on the sixth move of the game which was accepted. The draw ensured that Smith could not win the tournament. His only possible gain would be rating points from the draw against the higher-rated Davy.

Wilkinson was none too pleased and actually withheld a bonus prize of J$20,000 for the early draw. “Rules are going to be put in place to stop this practice,” Wilkinson declared. 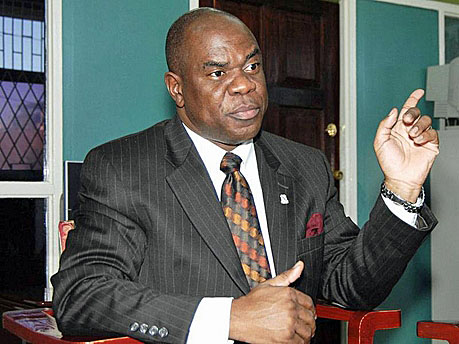 A fierce discussion has erupted on the FM Warren Elliott’s “WEchess” Facebook page with GM Maurice Ashley also weighing in.

I must say that it is sad to see this draw issue continue to plague chess. I recall my game against Jomo where I had White going into the last round where a draw would have won clear first. Because I felt an agreed draw is a stain on the sport, I chose to play the game with a clear mind for the win. Thanks to that decision, we had an exciting memorable game and Jomo had a deserving win. That is how chess should be. The fact that we could still have six move draws is simply sad, and shows something is fundamentally wrong with the current rules.

Davy had earlier defended his decision on Facebook by referring to short draws given by top players in professional tournaments. He was also vigorously defended by some in the community under the rationale that the result was not against the rule of play.

Of course, this is an age-old debate and was rejuvenated recently after a rash of draws during the World Candidates in which Boris Gelfand won the right to challenge World Champion Viswanathan Anand.

This problem has been mitigated by the so-called “Sofia Rules,” a method of encouraging fighting chess by enhancing the incentive to win. These rules impose a minimum move limit and a progressive point system giving three points for a win and one for a draw. Jamaican-born GM Ashley actually initiated a debate back in 2003 around the time this problem became acute. Nevertheless, the issue is not whether a draw should be a legal result in chess, but the spirit of competition.

Notwithstanding, Wilkinson has received some heat for his decision to rebuke the players and withhold the bonus prize, but the debate rages on. Let us hope that the JCF can do the right thing to promote “fair play” and not allow such an issue to polarize the community. Other federations have dealt with this issue and it is something that is still being debated.