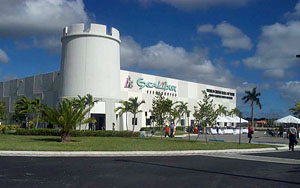 “Conceived by philanthropist and inventor Sidney Samole, this building is visually stunning. Approaching the area, one can see the building distinguished by the 45-foot towering rook built into its architecture. The brilliant white building can also be seen from the Florida Turnpike and has a very elegant appearance. In the reception area, the walls are adorned with attractive wood paneling, decorative wall furnishings and tropical plants. This area leads into the exhibition hall.” (see story)

The last time I dropped by years later, it had been closed. I saw workers inside apparently breaking the place down. After the auspicious opening, I got the impression that there was little support for the hall in its Miami location. Years later, negotiations were made to move the hall to St. Louis, the new Mecca of U.S. chess. The Samole idea would live on. 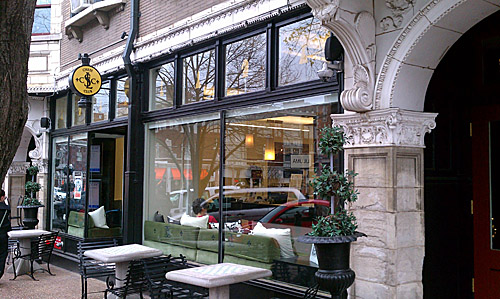 I was visiting St. Louis for my great aunt’s birthday party. Of course, no chess player’s trip to St. Louis would be complete without a trip to the now famous Chess Club and Scholastic Center of St. Louis (CCSCSL). The majestic center is perhaps one of the best chess clubs in the world.

Having covered the 2009 U.S. Championship in St. Louis, I had seen the club in all its classic splendor. However, the World Chess Hall of Fame had just opened September 9, 2011 and it was certainly my main purpose driving to Maryland Avenue. Unfortunately, I had forgotten my real camera, so I had to rely on my HTC EVO phone camera to capture the moment. 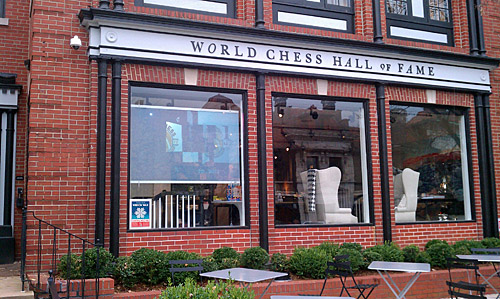 The Hall of Fame sits on top of an elevation directly across from the CCSCSL. Walking in one finds the style very crisp with black and white tones and classic wooden floors. A placard greets you,

“The mission of the World Chess Hall of Fame is to Educate visitors, fans, players, and scholars by collecting, preserving, exhibiting and interpreting the game of chess and its continuing cultural and artistic significance.”

There is a gift shop on the right after which the reception desk welcomes visitors. There is no fee for entry, but a donation is suggested. I would imagine that few have entered without a minimum donation since the work of Rex and Jeanne Sinquefield is one of admiration. 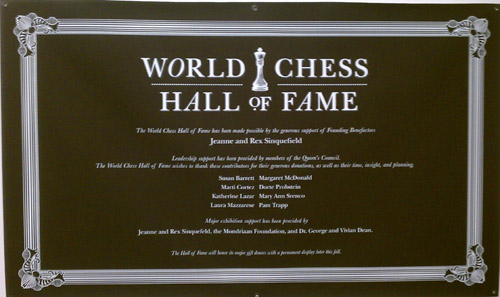 The 15,900 square foot residence has a winding staircase in the middle of the building with decorative chess motifs embedded in the architecture. There are three floors to the museum each with different exhibits. On the first level is the “Out of the Box: Artists Play Chess” featuring the massive, life-sized chess set by Liliya Lifanova along with a variety of eclectic chess sets. My favorite was the geometrically-induced black and red set by Barbara Kruger. 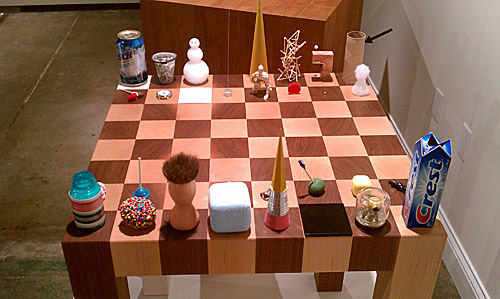 Unique piece by Tom Friedman…
not the author of The World is Flat. 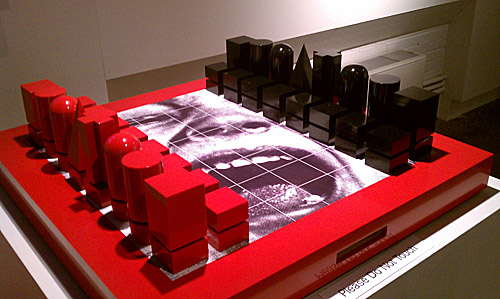 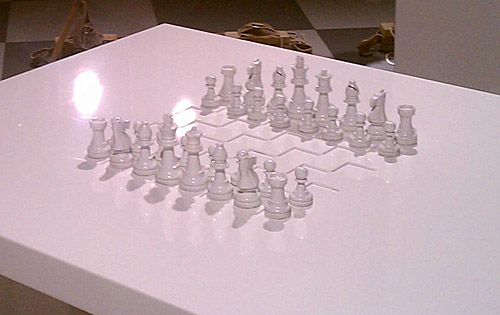 “Play It By Trust” by Yoko Ono

On the second floor was the massive collection of 30 sets by Dr. George and Vivian Dean. This was an absolutely breathtaking exhibit with just about any type of theme one can imagine. I overheard a visitor asking about the communist propaganda (vs. capitalism) chess set. All sets were place in acrylic boxes with cards to describe the origin, history and theme. One can conceivably spend an hour in this room alone. Many of the sets are very ornate and intricately-designed. 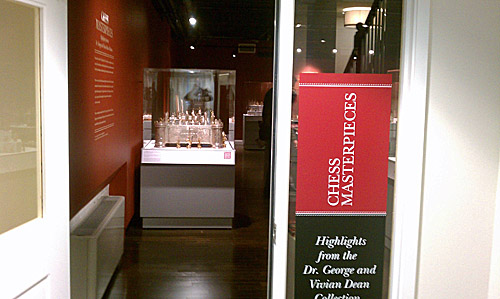 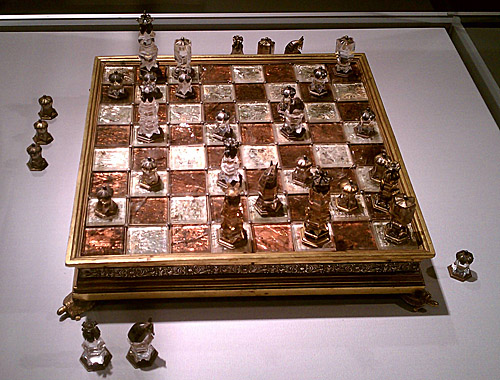 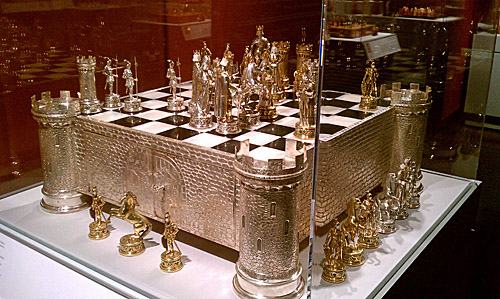 On the third floor was the Hall of Fame exhibit, but there was a tournament in progress. The hall was lined by plaques of those players inducted into the Hall. For a tournament to be played with the great names as the “fly-on-the-wall” must be inspiring. Some of the players were playing in the Hall of Fame and other played in the CCSCSL. I noticed IM Angelo Young playing IM Daniel Rensch (Young won). As I prepared to leave, Young came away from the board and greeted me. I appreciated the nice gesture. 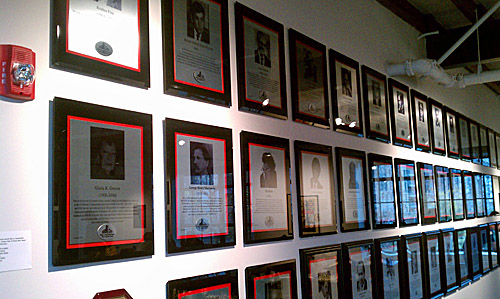 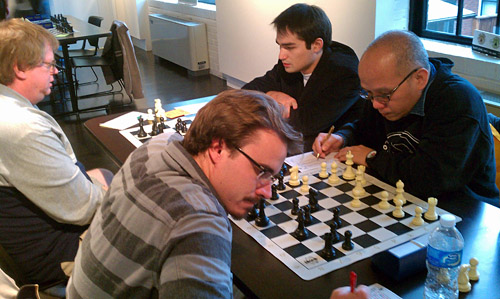 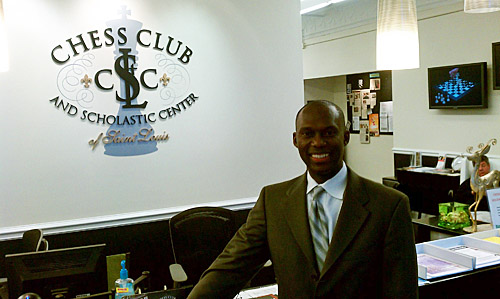 Proving that I was there!

I walked over to the CCSCSL and noticed a few aesthetic changes since 2009, but the same class was present. After speaking with several club members including Albert Howlett and Greg Williams, I went upstairs and saw the other participants. I saw Grigory Kaidanov walking in one of the playing room not certain if he was playing or not. 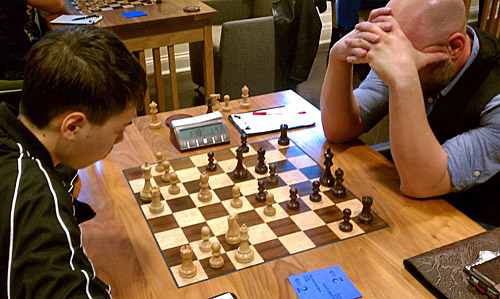 After watching the games for about 15 minutes I ventured back downstairs to the basement where perhaps I saw the most changes made since 2009. The area is basically set up as a lounge area for players to read, socialize with an adjoining room used for analysis. 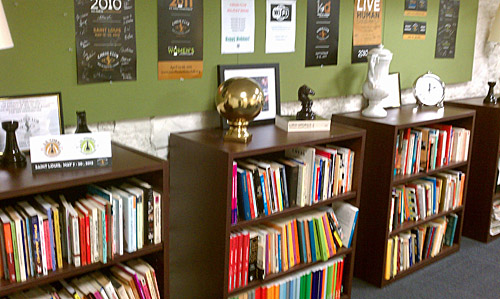 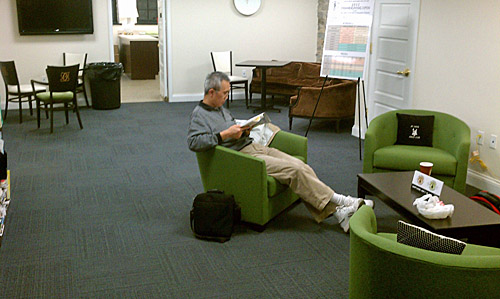 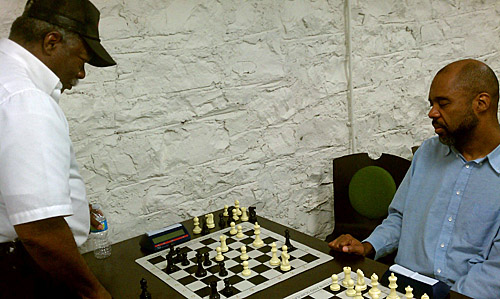 After watching Howlett and Williams play a couple of games of blitz, I took one last look at the wonderful facility and some of the news articles posted on a bulletin board. I noticed a plaque of a deceased player named James Miller… very touching. 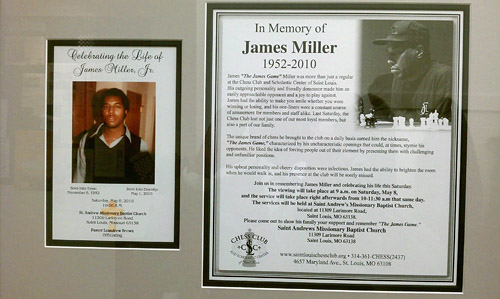 After such a wonderful tour, I ventured out the back door into the autumn drizzle to find my way to my great-aunt’s 97th birthday party. It was great to be back!!