Botswana’s stalwart women player Boikhutso Mudongo is now Women International Master. This follows confirmation from FIDE after her outstanding performance at the Zone 4.3 championships held in Gaborone in April 2011.

In a highly contested tournament, Mudongo finished comfortably on position 2 with 7.5 points out of 9. Her outstanding performance on the day was halted by a loss to South Africa’s Sischy Monique Sian in round 4.’ It was a highly tactical game that could have gone either way’ says Mudongo when quizzed about a loss that deprived her the championship for the tournament.

Mudongo who has represented Botswana at the Olympiad since 1998 is steadily establishing herself as a formidable women player in the region. She recently increased her silverware when she trounced her opponents to win the silver medal at the just ended All Africa games in Mozambique.

‘Chess is a part of me, it’s my passion and I have always known that with the right commitment and hardwork, I will achieve greater things’ quips Botswana’s Olympiad bronze medalist. 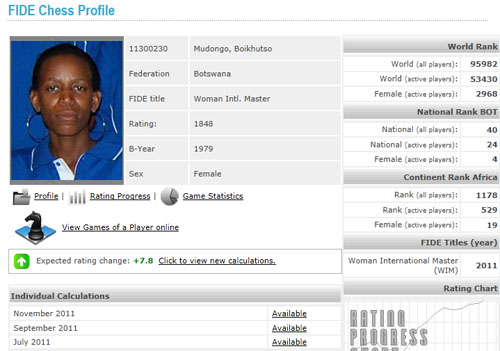 Boikhutso Mudongo’s achievement adds on the number of titled players in Botswana following on the greatest achievement by Women Grandmaster Tuduetso Sabure.