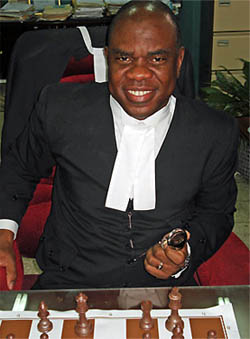 Attorney-at-law Ian Wilkinson, the President of the Jamaica Chess Federation, Chairman of the Magnificent Chess Foundation and the President of the Jamaican Bar Association, is scheduled to leave the island on Thursday, September 29, 2011 for Milan, Italy to sit on the Ethics Commission (“EC”), the disciplinary arm of FIDE, the World Chess Federation. The EC will hear a number of cases or complaints involving players and other persons from the chess world.

Popularly called the “World Chess Court”, the EC is chaired by Italian Supreme Court judge Roberto Rivello. Wilkinson first sat on the EC in July 2007 in Athens, Greece when it dealt with a number of cases including the famous “toiletgate” case arising from the 2006 world championship match between two former world chess champions, the Bulgarian grandmaster Veselin Topalov and the Russian grandmaster Vladimir Kramnik. Topalov caused a stir during the match when he alleged that Kramnik was cheating, by getting assistance from a computer program, whenever he went to his restroom. Topalov, who lost the match, was unable to substantiate the allegations and was disciplined by the EC.

Wilkinson has sat on subsequent hearings including Berlin, Germany in May, 2010 and Siberia, Russia in September, 2010. He was originally appointed to the EC by FIDE during its Congress in Italy in 2006 and was re-appointed unopposed at the Congress of one hundred and fifty nations in Russia in 2010.

Posted in Caribbean, Jamaica | No Comments