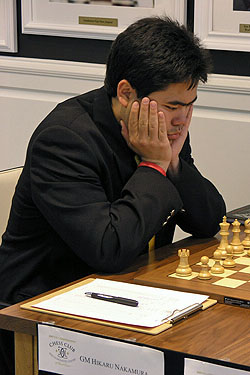 The pairings of the first round of the FIDE World Cup were released in July and after a couple of changes will commence on August 26th in Khanty-Mansiysk, Russia. Russia will bring a delegation of 26 players. China will bring nine players, Ukraine, eight. Pressure will be on Russia to produce the top three positions.

The Americans have six players, but a glaring absence is GM Hikaru Nakamura. His absence has the chess world buzzing. Nakamura missed the U.S. Championship (Zone 2.1) and the Pan-American Continental Championships in Mexico. (Note: “Mishanp” of Chesstranslation.com pointed out below that Nakamura did qualify for the World Cup on rating… 2770 FIDE. There is some discussion at chessgames.com on his absence.)

Players such as Magnus Carlsen, Levon Aronian, Vladimir Kramnik, Nakamura and Veselin Topalov have nixed the cycle for various reasons, but all may attempt to qualify given the following qualifications.

The participants in the next Candidates cycle with be chosen like this:


One glaring omission from the World Cup was Dutch Grandmaster Anish Giri who has been climbing rapidly up the ELO ladder. Dutch website Chessvibes made a strong case as to why Giri should have been considered for one of the wildcard spots. Apparently the answers FIDE sent were not satisfactory and it was implied that it was due to political stances taken by the Dutch Chess Federation.

The Dutch also supported Karpov and wrote a scathing statement on Ilyumzhinov’s meeting with Muammar Qaddafi, leader of Libya. Peter Doggers of Chessvibes rebutted several of the points made in the response. (read the interesting exchange here)

While FIDE may deny that politics played a part, the reasoning given in the response to journalist Stefan Löffler’s inquiry was a bit strange. The first statement starts, “The nominations of the FIDE President are awarded upon his decision, mostly as an incentive to national federations which actively support FIDE events and FIDE activities such as “Chess in Schools”, as well as to former World or Continental champions.” Why should this be an incentive to federations as opposed to merely awarding a worthy individual player for his talents?