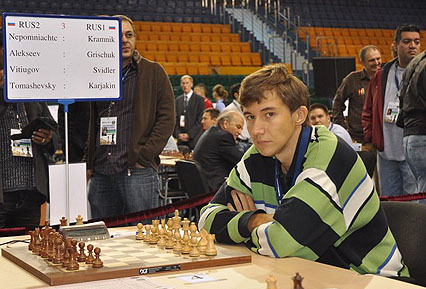 Sergey Karjakin is finally living up to his early promise. The record-holder for the world’s youngest Grandmaster at 12 years, 7 months, the Ukrainian emigre is now #4 on the rating chart. Photo by ugra-chess.com.

Magnus Carlsen reclaimed the top spot on the FIDE rating chart by gaining six points to weigh in at 2821. World Champion Viswanathan Anand remains at 2817. The other top ten players were relatively active with Levon Aronian (2805, -3) remaining third and Sergey Karjakin vaulting to fourth (2788, +12). Vladimir Kramnik dropped slightly in ranking (2781, -4) while Hikaru Nakamura (2770) reached his highest standard at #6 in the world. All the naysayers stating that Nakamura would not make 2700 a few years ago are all eating their words now.

There were modest losses in seven of the top ten players with Ruslan Ponomariov (2764, +10) gaining due to his win of the Ukrainian Championship. Besides Carlsen and Karjakin, he was the only top ten to gain ELO points. Of course Boris Gelfand (2746, +10) gained with his win of the candidates tournament. He will face Anand for the World Championship next year. 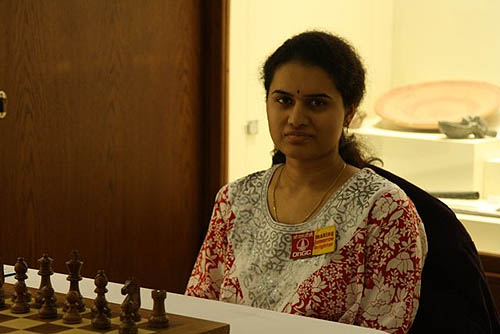 GM Koneru Humpy is within 100 points of Judit Polgar.
Photo by wwcxc2010.tsf.org.tr.

While Judit Polgar has unofficially made it back over 2700, Anish Giri (2701, +14) has finally eclipsed the 2700 mark. It was inevitable and widely expected given the youth movement sweeping the chess world. Along with Carlsen, Karjakin, Nakamura and perhaps Teimour Radjabov (2744), Giri is viewed as a championship contender.

On the women’s list, Judit Polgar (2699) will widen the gap a bit, but Koneru Humpy (2614) is within 100 points of the long-time chess matriarch. Humpy will play Hou Yifan (2575, -37) in December for the World Championship. Hou has suffered in past months faring poorly in the Asian Individual and the Grandmaster Tournament in Danzhou.

She also fared poorly in the AAI tournament in India. This has to be one of the biggest collapses for a World Champion and will make the match with Humpy more pressure-intense. Viktorija Cmilyte (2528, +24) gained big after winning the European Women’s Championship, but there is not much movement in the women’s list.

New leader on the junior list. Le Quang Liem (2715, +28) of the Vietnam has over taken Fabiano Caruana (2711) who had inherited the lead from Carlsen. The list may continue to see instability since Le will be leaving the list within a year. Le did well in the Capablanca Memorial tying for joint first with Vassily Ivanchuk (losing on tiebreak).

Giri (2701) comes in third and China’s Yu Yangyi (2672, +26) powers into fourth. He is one of several Chinese junior making a presence. After Sebastien Feller (2666, +6) you have the highly-touted Wesley So (2658, -9) who is in the conversation of potential championship contenders. Parimarjan Negi (2642, +20) recently got joint first in the AAI Chess Championship in New Dehli, India.

Have not had an account for quite sometimes, but the top players in Africa are Ahmed Adly (2631) and fellow Egyptian Bassem Amin (2609) who are both very active players. Essam El-Gindy (2510) is almost 100 points back, but there are not other players in the 2500-2600 range since Moroccan Hichem Hamdouchi claimed French citizenship.

There are a number of players in north Africa over 2400 such as Algeria’s Aimen Rizouk (2539), Egypt’s Fouad El-Taher (2483), Morocco’s Tissir Mohamed (2454), Tunisia’s Slim Belkhodja (2440) and a few others. However in sub-Saharan Africa only Robert Gwaze (2429) and Kenny Solomon (2426) are over 2400. Amon Simutowe of Zambia is currently taking studies at Oxford. One bright spot for Africa is the rise of Zambian player Daniel Jere. Watch for him!