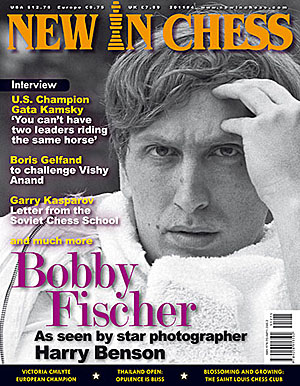 At the recent World Open in Philadelphia, a fellow chess player and I were discussing New in Chess and he was adamant about the notion that the Dutch-based magazine should move its stellar publication online. I disagreed. He reasoning was that the content would then become more interactive and it would be more consistent with what players are familiar with. I understand the rationale, but here is why I disagree.

Probably the most salient thought is that there is a different experience reading a magazine and going through the games on the board as opposed to rifling through 50 games in a few hours. Going through NIC gives you a greater sense of connecting with the stories and it is not the kind of media you skim through (as is typically done with lengthy online material). NIC is the kind of magazine that a non-chess player can read… and it looks wonderful on the coffee table! 🙂

I will admit that NIC will have to eventually migrate more of its content online since the print business is suffering, but there are debates on whether magazines of its ilk will continue to draw wide support given its quality of deliverance. Saying this, let’s review the latest issue.

The first thing you notice about the new NIC is the cover with Bobby Fischer in a very enigmatic pose. There is a wonderful story on Harry Benson’s characterization of Fischer through his photo lens. There has been so much emphasis on Fischer’s mental state (in later years) by people masquerading as psychologists and psychiatrists, that well-balanced accounts of Fischer are hard to come by. The article, “Bobby Fischer as Seen by Harry Benson” is an excellent piece showing a side of Fischer we do not often hear.

NIC’s Cafe is always an interesting read and this issue has an interesting exchange on the subject of cheating between NIC and chess software giant, ChessBase. The recent Candidates Matches were also covered and if anyone could put a good spin on a tournament where 27/30 games were drawn, then NIC was successful. One of the highlights of this feature was Anish Giri wonderful analyses.

There was a great feature on the 2011 U.S. Championship which gave a tour of the opulent club based in St. Louis, Missouri. It is a good read and it complements the interview done by Dirk Jan ten Guezendam, who gave glowing reviews of his visit. One of the controversies brewing is Gata Kamsky’s admission that he is the strongest player in the U.S. despite Hikaru Nakamura’s being #6 of FIDE’s list. This minor controversy was was precipitated by Nakamura’s critique of the quality of play at the tournament and characterizing Kamsky’s style as “dry.” We will hear more about this in the coming months as Olympiad is next year in Turkey and the two will still be teammates… hopefully.

Kasparov pens an interesting article about the Soviet School of Chess saying that the epitaphs written of its demise were premature. He defends this by pointing out the success of players like Boris Gelfand and Vassily Ivanchuk and the recently-ended Candidates featuring seven of eight players from the supposed “Soviet School” (a moniker with no clear-cut definition).

The arguments are interesting, but highly debatable. With India’s Viswanathan Anand as World Champion and Asian federations among the fastest growing in terms of strength, we are clearly in a post-Soviet era where training methods of Magnus Carlsen and Hikaru Nakamura have gained some currency. The debate continues.