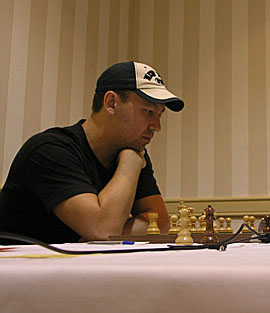 Gata Kamsky has been on a roll lately and continuing his onslaught by winning the 2011 World Open in Philadelphia. The two-time US Champion has had a nice run including defending his U.S. title, and a strong showing in the recent Candidates tournament defeating former World Championship contender and world #1, Veselin Topalov. He lost only to the eventual winner, Boris Gelfand.

In a recent New In Chess interview, he discussed some his philosophies on his approach to chess. He described chess games as a symphony with two competitors composing the piece of art. In this tournament, he was able to create a few artistic encounters including this nice win over Leonid Yudasin.

Kamsky scored key wins over GMs Aleksandr Lenderman and Jaan Ehlvest before drawing quickly with Ilya Smirin. His chief competitor Michael Adams had actually led throughout the tournament but his four draws in the last five rounds allowed Kamsky to catch him in the penultimate round. Both players drew their final games, tie for first and would meet in the Armageddon playoff in a match between the U.S. and English champion. Adams won the drawing and chose to hold with the black pieces and three minutes. However, Kamsky pressed and was able to score the victory and thus, the official title and an extra $308.00 over the $14,267 that both he and Adams received. 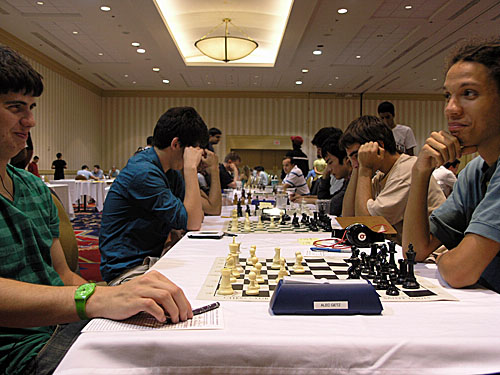 The everpresent youth movement in the Open Section. NM Raven Sturt and FM Kassa Korley (of New York) are glad to be a part of it.

In an interview with U.S. Chess Online, Kamsky made mention of all the young players in the field. Certainly the tournament hall was dotted with a sea of scholastic players who were playing in the top sections. “I was happy to see young faces here,” Kamsky stated. “It means chess is getting more and more popular.”

Certainly the youthful age of chess continues, but as recent events have shown, none of the 40ish players are willing to give up without fighting. Viswanathan Anand, Boris Gelfand and Vassily Ivanchuk certainly give Kamsky lots of company to teach a few more lessons to the Magnus Carlsens of the world . However, if the strong showing of youth (particularly players of Asian descent) is anything to go by, American chess may be having a renaissance.

This is the third time Kamsky has been World Open Champion, having won the event in 1991, 2006 and now 2011 . GM Alex Yermolinsky is the only other player to have accomplish this feat. Bill Goichberg made closing comments that he initially doubted that the tournament would break 1,000 participants, but the final count was 1,087. Certainly a far cry from the 1,200 the tournament usually draws. The World Open will return to Philadelphia’s Sheraton Hotel next year for its 40th anniversary before moving to Virginia.