The Bahamas National Open took place April 15th-17th in Nassau. The round started out on Friday evening with a brief ceremony as the CW Sawyer Primary School. There were 26 players participating with 16 in the Candidates section and 10 in the Scholastic section. There were several national champions in the field including: Ken Gibson – 2008 and 2010; Yan Lyansky – 2009; Charles Duncombe – 2006; NM Byron Small – 1992 and 1997.

The Bahamas Chess Federation invited The Chess Drum’s Daaim Shabazz to participate. He led with wins in the first three rounds and would need a draw to clinch a tie for first. Shabazz started with 1.e4 against Yan Lyansky and perhaps unwisely, immediately entered complications. Lyansky played solidly, but Shabazz may have missed chances to gain favorable attacking chances. In the end, a tactical melee ensued and Shabazz ultimately got the worst of the sequence. Lyansky would win the game and tournament. 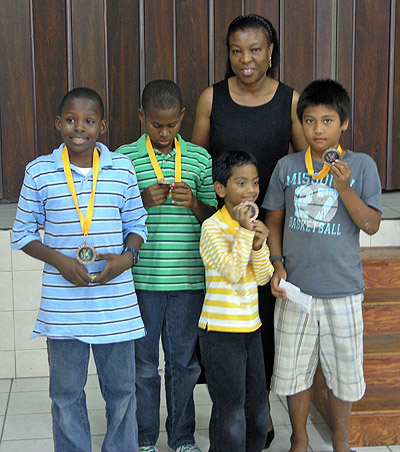 Despite the change of venue to the Sheraton Hotel in round two, the tournament ran smoothly under the stewardship of Warrren Seymour. At the closing ceremonies, the attendees got a surprise as former national player Antoinette Seymour was received to a warm reception. She spoke briefly about her chess-playing days and the way that it benefited her. She assisted in handing out the trophies. Organizers are aiming for 40 players in next year Bahamas National Open.

Historic Moment for the Bahamas