Approximately a month ago, Delise O’Meally contacted The Chess Drum’s Daaim Shabazz about Jamaican chess legend, Orrin Tonsingh. Tonsingh was one of the most prominent trailblazers in Jamaican chess and represented the nation on numerous occasions.

It turns out that O’Meally is the younger sister of Tonsingh and she wanted to share fond memories of her older brother. O’Meally is based in Indianapolis, USA and serves as an attorney for the National Collegiate Athletic Association (NCAA) where she is the Director of Governance and International Affairs.

O’Meally followed her brother’s footsteps into the field of law. In fact, it was a fire at the law office that claimed the life of her brother. O’Meally writes a very touching essay which is presented below. Enjoy! 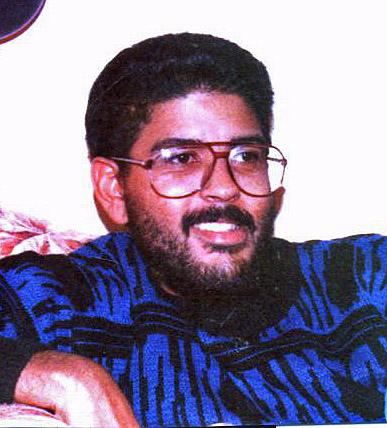 Orrin Kerman Crarey Tonsingh was born on October 31, 1957 in Kingston, Jamaica. His mother (my mom) was Olga Winnifred Crarey, and his father was Oscar Kerman Tonsingh. He has 3 sisters, an older sister on his father’s side – Annette Tonsingh, and two younger sisters on his mother’s side – Yvette and Delise. [Yvette is an engineer at Microsoft Corporation in Seattle, Washington and Delise followed Orrin’s footsteps, and is an attorney working for the National Collegiate Athletic Association in Indianapolis, Indiana.] Orrin preceded both of his parents in death. His father passed away two years after Orrin died (in 1995) and his mother passed away in 2010.

At about one year old Orrin developed asthma, an illness that was prevalent on his father’s side of the family. Doctors predicted that he would outgrow this but he never did and it is possible that his asthma made him more susceptible to the effects of smoke inhalation and contributed to his death on July 30, 1993. As a child he struggled with this condition, with many late night visits to the hospital for medication to overcome asthma attacks.

He started preschool at 3 years old. His first school was the Christian Day Prep School for boys on Oxford Road in Kingston. He did well in school despite missing 3-5 weeks each term due to his asthma attacks.

Orrin’s father was not involved in his life during his early years, in fact he saw him no more than a handful of times between birth and the age of 15. He was raised by his then single mother, his maternal grandparents Robert and Hilda Crarey and several of his aunts (mother’s sisters) contributed to his development.

Orrin and his mother moved to a more rural part of Jamaica when he was about 6, and he was sent to boarding school in Clarendon – Knox College. He struggled while in boarding school, lost lots of weight and seemed to have more episodes of asthma so his mother made the decision to remove him from the school, and send him back to Kingston to live with her parents while she continued to try to make a living on the western end of the island. She would travel to Kingston every other weekend to visit.

As is the rite of passage for all Jamaican school children, Orrin sat the Common Entrance Exam at around the age of 10, and earned a place in high school at Jamaica College High School in Kingston. After his first few weeks at school he requested his first Chess set. His mother found a small folding set in a bookstore and he was ecstatic. He learned the game fairly quickly. At heart he was an ardent sportsman although he couldn’t play football, cricket, or run track (the general sports of choice at the time) because of his asthma. He was a tremendous sports fan and did however keep scrapbooks of all sporting events. 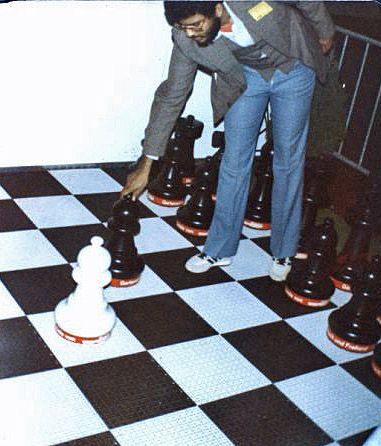 During this time in his life, he had several significant changes. His mother met and married my father, his grandmother, who had been his primary caregiver passed away from cancer, and he transferred high schools from Jamaica College to Cornwall College high school in Montego Bay. He remained at Cornwall College for the duration of his high school career. It was here that he blossomed as a chess player, competing in his first international tournament in Curacao in 1973, and leading his school to victory in the 1976 Schoolboy Chess Team Championships. Orrin passed his GCE External Exams in nine subjects with distinction and merit. After he took the Advanced level external exams, he sought and gained entry to the University of the West Indies in Cave Hill, Barbados where he began to pursue his goal of being an attorney. 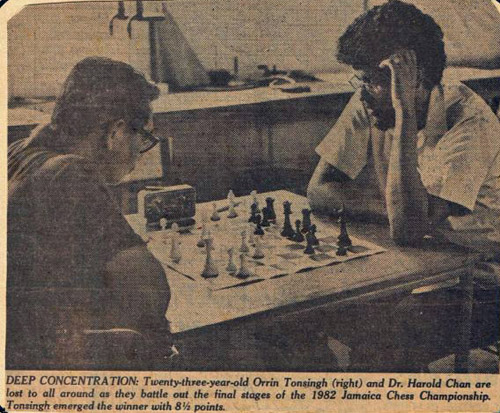 During his teenage years and early college years, he connected with his father and his older sister, traveling to London with them. After he completed his degree at Cave Hill, he enrolled at the Norman Manley School of Law in Kingston Jamaica. Graduating as a full-fledged attorney at law and was admitted to the Bar. He started his practice with a group of attorneys and later branched out on his own.

He met his future wife Cheryl, while at Cave Hill, and married her in Antigua in August 1983. The couple had no children.

Chess remained his number one pastime. He excelled and was national champion more than once. He travelled to many countries to play chess and was able to observe the greatest Masters in the game. He earned a rating from the World Chess Federation and the title of National Master in 1983. He loved the game, two weeks before his untimely death he had indicated his intent to enter the national championships again. 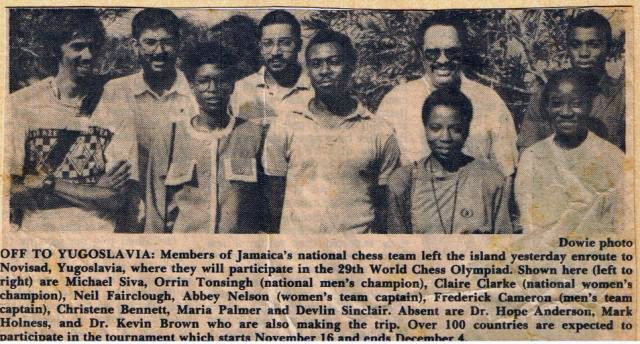 He passed away on July 30, 1993. He was at the Supreme Court on King Street in Kingston, from what I’ve heard he had just completed his case and was packing up to leave. According to the newspaper reports, at almost 2:00 in the afternoon there were several small explosions from the powerhouse and fire began, the electricity went out and the ground floor was engulfed in smoke. People ran out of the building, and Orrin did too but he was overcome by the smoke and collapsed upon making it outside the building. He was rushed to the hospital in the back of a police car but did not survive. 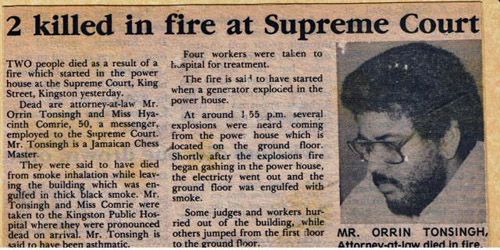 I remember him as a soft spoken gentle person with a dry sense of humor, and an endearing chuckle. He was easy going in life, but strongly competitive academically and with chess. He was motivated to be successful and worked hard at all he did. From the eyes of a little sister, 11 years younger, he seemed like superman (and in fact claimed to be superman many times, or at least superman’s unassuming alter ego Clark Kent 🙂 The last time I saw him alive was while I was living in New York. He made a stop there on his way to a chess event in Europe. He, along with his good friend and chess colleague Neil Fairclough, spent a few days in New York around 1990. I miss most, the opportunity to have developed a deeper relationship as adults. He would be 54 this year.

Hope this helps…. Looking forward to reading what you write, thanks for keeping his memory alive.