This piece comes from Susan Polgar Chess Daily News on Botswana’s Boikhutso Mudongo, one of the first female African players to earn an Olympiad medal. This exclusive was done by Victor Muyakwabo.

Chess’ Women’s Fide Master, Boikhutso Mudongo continues to flourish both at home and abroad. She has enjoyed success since she started playing chess in 1995, culminating in her being crowned the Sports Women of the Year 2003.

Botswana’s WFM Boikhutso Mudongo after winning a bronze medal
at the 2002 Olympiad in Bled, Slovenia.
Photo courtesy of Jerry Bibuld.

Mudongo’s passion for chess grew when she was at Lethabile Junior Secondary School in Tonota when she was in Form One in 1995.

She had before then tried her hand at softball but because of the limited chances, Mudongo abandoned the sport. When she started, Mudongo says chess was a new game to her and it took quite a while before she could master the moves. She took three weeks to know the names of the pieces and learn the proper moves. Mudongo said it was not very hard to learn the game as she had an interest.

Mudongo played chess for two years and was selected to the national team. After finishing her Form Five, Mudongo joined Northern King Grazen, a military club based in Francistown where she played until the time she moved to Gaborone.

But after settling in the capital, Mudongo had to move as she says it was not easy for her to continue playing for the Francistown club.

“One reason was that my former club at that time was collapsing and it needed someone who was working in the army with direct contact with army management in order to revive it,” Mudongo said. The talented Mudongo attributes her success to hard work, determination and passion for the sport.

She says her preparations differ depending on the type of tournament she would be competing in but does not practise everyday.

Mudongo singles out Tuduetso Sabure as her toughest opponent as she has got a different style and most of the times she introduces new moves. Mudongo says in most instances, Sabure beats her to time as it takes her (Mudongo) a long time to study her moves.

Mudongo says she will not quit the sport anytime soon and will participate in local tournaments to encourage young players who want to progress in chess. 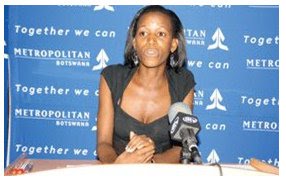 Mudongo believes that the notion that old players have to step down to create space for youngsters does not help much as upcoming players need motivation and competition in order to improve. Mudongo says besides chess, she is a football fan and supports Manchester United of England and Extension Gunners locally.

Josh Colas on 'The Scoop'